U.S. Says Some Troops To Stay In Africa Amid Moves By Russia, China 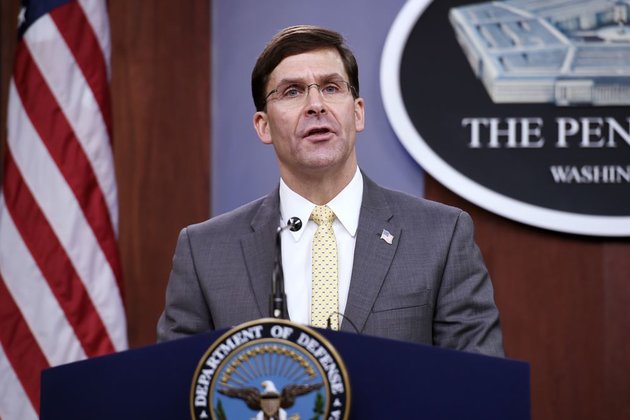 U.S. Defense Secretary Mark Esper says the Pentagon does not intend to remove all its forces from Africa, amid concerns from allies that Washington could abandon the continent militarily while China and Russia "aggressively" look to increase their influence and as the extremist threat remains.

'We are not going to totally withdraw forces from Africa...I know that is the concern of many folks, but again I would say that no decisions have been made yet. This is a process,' Esper said on January 30.

Esper is carrying out a global troop review meant to find ways to free up more resources to address challenges from China's military in Asia.

France especially has expressed concerns about a dramatic U.S. pullout of its 6,000 forces from various troubled areas in Africa. Paris relies on U.S. intelligence and logistical support for its 4,500-strong mission in the Sahel region, which has been hit by deadly extremist violence.

Separately, in a congressional hearing on January 30, General Stephen Townsend, the head of U.S. Africa Command, said Africa is key ground for competition with China and Russia "who are aggressively using economic and military means to expand their access and influence.'

He also pointed out the "first visible sign of cooperation we've seen" in Africa between the militaries of China and Russia, including their joint naval exercise off the coast of South Africa last year.

"China and Russia are seeking to counter the strategic access that we need for American security and American prosperity," he said.

Meanwhile, he said China has been offering African countries "smart cities" technology equipped with facial-recognition technology and using that information for itself before delivering it to the host countries.

The general told lawmakers that U.S. security at home depends on what is happening in places elsewhere in the world, given the threat from terror groups that have been pressured by U.S. forces but remain active.

"In the past, maybe we've been able to pay less attention to Africa and be OK in America. I don't believe that's the case for the future," he said.

"We cannot take pressure off major terrorist groups like Al-Qaeda and [Islamic State]," he said. 'These groups and many others remain an inconvenient reality in Africa."

With reporting by AP, Reuters, military.com, and dpa