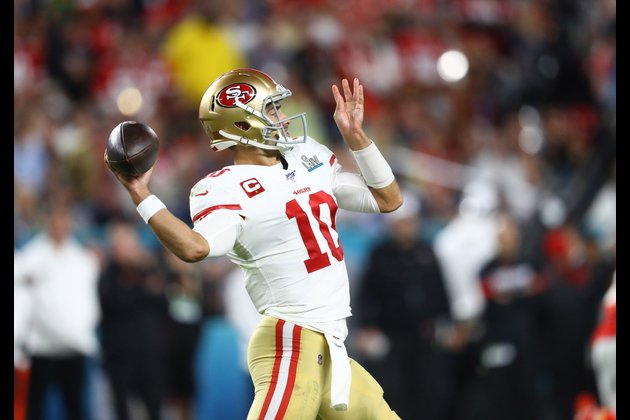 While the Kansas City Chiefs were celebrating their Super Bowl victory with a parade honoring the hometown heroes on Wednesday, San Francisco 49ers quarterback Jimmy Garoppolo was pausing to reflect again on what could have been while he and his teammates were saying a final goodbye to the season.

While reporters gathered as the players cleaned out their lockers, the critics' choice as most responsible target was asked how the 31-20 defeat could inspire the 49ers next season.

"I don't know, I keep telling myself, 'You've got to remember that feeling when the confetti was coming down, just remember that moment and let it fuel you for the offseason. Just come back stronger, more ready for next year,' " Garoppolo said via the San Jose Mercury News.

"It'll be hard to get back here but looking around the room, looking at all the guys, we have the pieces for it, and the guys who have the right mindset for it. That's the encouraging part. Most guys feel just about the same way the past couple days."

The quarterback, who won two rings with the New England Patriots as a backup to Tom Brady, was asked about his horrendous fourth quarter, where he went 3-for-11 passing.

"If you just look at the stats like that, yeah, it is what it is," Garoppolo said. "As an offense, as a team, we've been in that situation multiple times and answered the bell. It's tough that one time you didn't. But that's what people remember, that's the world we live in and you just have to own up to it and be a man about it.

Garoppolo was quite frank about the ultimate missed opportunity, when he overthrew wide-open wide receiver Emmanuel Sanders on what could have been a touchdown with about 90 seconds remaining and the 49ers down 24-20.

"That's something you've got to move on from. It sucks," Garoppolo said. "Obviously some throws I wish I had back, some throws I made differently. The one to 'E,' just missing him, putting a little too much on it. But you've got to be a man, you have to own up to those things. Some things I'd rather have back. But this whole year, it's been incredible."

Sanders was even more candid about the 49ers' fourth-quarter collapse.

"I watched the Super Bowl at least five or six times, and it's like when you watch a movie like the Titanic and hope the ship doesn't sink, and the ship sinks over and over," he said, via the San Jose Mercury News.