Oscars Nite is Nearly Here and '1917' Leads the Charge 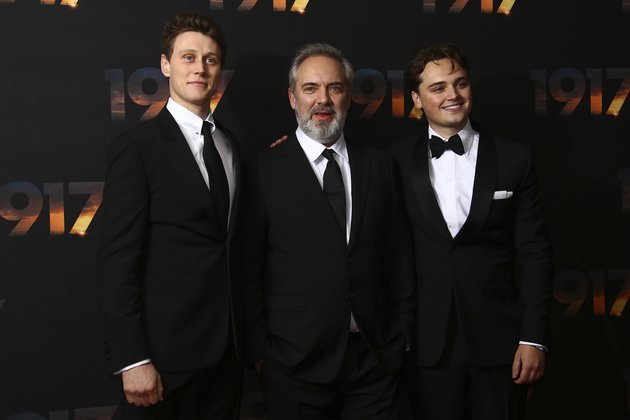 HOLLYWOOD - Hollywood's award season reaches its extravagant finale at the Oscars on Sunday, with war epic "1917" tipped to dispatch a brigade of winners to the stage at the movie industry's biggest night.

Impeccably dressed A-listers and upstart documentary filmmakers will brush shoulders on the red carpet at Los Angeles' Dolby Theatre, as months of campaigning for 24 gold statuettes boil down to a single night.

The event comes as Hollywood mourns the death of Kirk Douglas, one of cinema's greats, who died Wednesday aged 103.

Sam Mendes's "1917" launched a late assault on this year's Academy Awards -- it was first shown to voters barely two months ago -- but experts predict it could outflank all rivals.

The World War I odyssey about two soldiers crossing no-man's-land -- filmed to appear like one continuous shot -- has conquered nearly all in its path in the award shows building up to Sunday.

It is the favorite for multiple Oscars from best director to cinematography, and the frontrunner for best picture, the night's top prize.

"It falls into traditional Hollywood -- it's what the Oscars like," Variety awards editor Tim Gray told AFP.

"It's big, it's epic, but it's hardly a formula film. It really is a knockout... it's just filmmaking at its best."

The unique ballot system for best picture -- which involves voters ranking films -- makes it somewhat tough to predict, and could create an opening for an unlikely candidate.

Despite the best efforts of star filmmakers Martin Scorsese ("The Irishman") and Quentin Tarantino ("Once Upon a Time... in Hollywood"), Mendes' main rival appears to be Bong Joon-ho.

The film about a poor family infiltrating a wealthy household looks to be a shoo-in for best international feature -- but could also triumph in some of the top categories.

The Oscars in the acting categories -- usually a subject of agonizing deliberation for industry pundits -- appear settled, with the same four stars sweeping up rave reviews and awards all season.

Joaquin Phoenix and Renee Zellweger are believed to be far ahead of the competition for best actor and best actress.

Phoenix underwent a striking transformation to portray the title comic book supervillain in "Joker" -- as did Zellweger to play legendary Hollywood diva Judy Garland in "Judy."

Tinseltown favorites Brad Pitt and Laura Dern have their fingertips on the supporting acting prizes, for their work as a laid-back stuntman ("Once Upon a Time... in Hollywood") and a cutthroat divorce lawyer ("Marriage Story").

"I see no scenario where any one of them loses," Deadline awards columnist Pete Hammond told AFP.

"People will say 'there's always an Oscars surprise'... but I think those four are going to win it," agreed Gray.

More fiercely contested will be the awards for best screenplay, editing and visual effects, with movies from Nazi satire "Jojo Rabbit" to period drama "Little Women" and even superhero epic "Avengers: Endgame" all in the mix.

The ceremony will go on without a host for a second consecutive time, after last year's batch of bright guest presenters caused a trend-bucking uplift in TV ratings.

In a possible tip to the ongoing controversy over the lack of female nominees, Irish maestro Eimear Noone will become the first woman to conduct a segment of music during an Oscars telecast.

Still, diversity among guest hosts and performers is unlikely to assuage anger over this year's nominations.

Cynthia Erivo was the only non-white acting nominee, for anti-slavery biopic "Harriet," and no women made the best director list.

"I wouldn't call it #OscarsSoWhite but I'd say it's #OscarsAsUsual," said Hammond.

"A British picture comes in at the end and wins a traditional kind of win, four white actors again... It looks like the Oscars could have been 30 years ago."