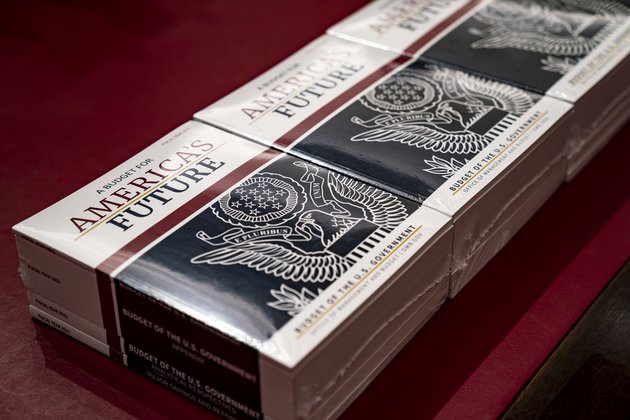 WHITE HOUSE - U.S. President Donald Trump's administration is proposing a 21% cut in aid the United States provides to foreign countries, with a budget request of $44.1 billion for such programs, compared with $55.7 billion enacted in fiscal 2020.

Lawmakers and others predict Trump's plan to cut one-fifth of foreign aid from the current level will not survive scrutiny on Capitol Hill, especially in an election year.

"...the White House should save some trees rather than sending us a budget that's headed straight here," tweeted House Foreign Affairs Committee Chairman Eliot Engel, attaching a photo of a blue plastic "House of Representatives" trash receptacle.

"We just disagree," said the acting director of the Office of Management and Budget, Russ Vought, in response to a VOA question at a White House briefing Monday. "The president disagrees with the idea that we should continue to have such robust levels of funding in the foreign aid category."

Vought noted that under the president's plan, which totals $4.8 trillion for the entire federal government, there would still be about $40 billion in foreign aid.

"So, it's a still a substantial amount," according to Vought. "We're still going to be at a very high level compared to the rest of the world, in terms of what we provide. Humanitarian assistance is still, under this budget with carry-over funding, going to be the second highest that the U.S. has ever provided to the world."

"It is likely that Congress will restore much, if not all, of the cut and, of course, the amounts in question are infinitesimal relative to the government's annual deficit and overall debt situation," Giselle Donnelly, said resident fellow in defense and national security at the American Enterprise Institute. "But the cuts are also of secondary importance compared to the way in which this administration has decimated the Foreign Service, and, as we have seen with the firing and denigration of NSC and ambassadorial officials, deprecated the 'quiet professionals' who serve on the front lines of U.S. foreign policy. One cannot put a price tag on the loss of talent and the lowering of morale."

Retired U.S. Navy Admiral Mike Mullen, who was chairman of the Joint Chiefs of Staff from 2007 to 2011, in a letter to Congress, is warning of the danger of such cuts.

"The more we cut the international affairs budget, the higher the risk for longer and deadlier military operations," wrote Mullen.

The assessment is shared by Center for American Progress Senior Fellow Brian Katulis, who notes that the United States has traditionally used foreign aid to help stabilize other countries, thus Trump should not "unilaterally disarm" by decreasing this tool.

"If we are not doing that, other places are going to see more violence, poor governance, and the sorts of problems that he [President Trump] tries to address by building a wall on the southern border-migrants and refugees - these are the sorts of things addressed by foreign aid," said Katulis, who worked at the National Security Council, State Department and Defense Department during the Clinton administration.

Combined with increased military spending, "the proposed foreign aid spending cuts underline the president's commitment to emphasize force over diplomacy and working with others in global affairs," said a former U.S. ambassador to NATO, Ivo Daalder.

"As in previous years, a bipartisan majority in Congress is sure to reject these cuts to help ensure the United States continues to engage the world with all of the tools needed for success," said Daalder, president of the Chicago Council on Foreign Affairs.

"It's become an annual event. The president's budget proposes massive cuts in humanitarian aid and international relief to the most vulnerable around the world, and the bipartisan majorities in the Congress reject these proposals and the flight from U.S. leadership that they represent," said Refugees International President Eric Schwartz. "The irony is that President Trump, Secretary Pompeo, and others in the Trump administration continually boast about the generosity of the United States. It's high time that their actions match their words."

The White House, while cutting other types of foreign aid, proposes a big boost in funding for the U.S. International Development Finance Corporation, a new and independent agency that provides funds for private development projects.

Aid to Ukraine would remain at the same level.

Trump last week was acquitted by the U.S. Senate of impeachment charges that he withheld aid to Kyiv to pressure the Ukrainian government to investigate former Vice President Joe Biden, now a Democratic Party presidential candidate.