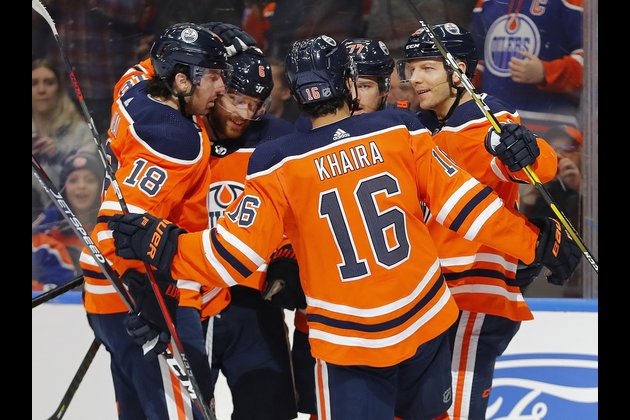 The Vegas Golden Knights have recorded 10 wins in their last 12 games to ascend to the penthouse in the Pacific Division.

The Golden Knights (38-24-8, 84 points) look to create a bit more breathing room on Monday when they visit the second-place Edmonton Oilers (37-24-8, 82 points), who have wonfour of their last five contests.

No pun intended, but Edmonton has a golden opportunity to take control of the division considering it plays nine of its final 13 games at home.

The Oilers improved to 17-10-5 at Rogers Place this season with a 4-1 victory over Columbus on Saturday in the opener of a four-game homestand.

Mikko Koskinen drew rave reviews for his play following his 45-save performance against the Blue Jackets, and for good reason.

"There's probably one reason why we win the game: our goaltending," Edmonton forward Alex Chiasson told reporters of the 31-year-old Koskinen, who has turned aside 97 of 99 shots in his last three appearances.

"At this time of year, the way the standings are, every game is meaningful," Chiasson continued. "You would think maybe we would be on our toes a little bit more."

"(Koskinen) was unbelievable. The rest of the group wasn't so unbelievable," Oilers coach Dave Tippett said.

To be fair, Edmonton superstar captain Connor McDavid was pretty good in his own right.

McDavid scored in that contest to boost his point total to 15 (three goals, 12 assists) in eight contests since his return from a quad injury. The former Hart Trophy recipient tallied twice in a 4-2 victory over Vegas on Nov. 23.

Leon Draisaitl, who set up three goals in that encounter, leads the NHL in both assists (67) and points (110) this season. The 24-year-old German joined McDavid and the rest of their teammates in being held off the scoresheet in the rematch against the Golden Knights on Feb. 26.

Max Pacioretty and defenseman Shea Theodore each scored in that 3-0 victory over Edmonton and the pair also tallied on Sunday as Vegas skated to a 5-3 win versus Calgary. Theodore's goal with 1:10 remaining in the third period proved to be the game-winner for the Golden Knights, who are an impressive 14-6-2 against Pacific Division foes.

"A lot of desperate hockey when you play in our division right now," Pacioretty said. "Teams are so close to each other in the standings, and some of the best players in the world over there tomorrow -- and they are feeling good about their game. So we got to slow them down and win a hockey game."

Marc-Andre Fleury, who turned aside all 29 shots he faced versus the Oilers in last month's meeting, is expected to be back in the crease Monday. The three-time Stanley Cup winner sports an 11-4-1 record with two shutouts in 16 career encounters with Edmonton.