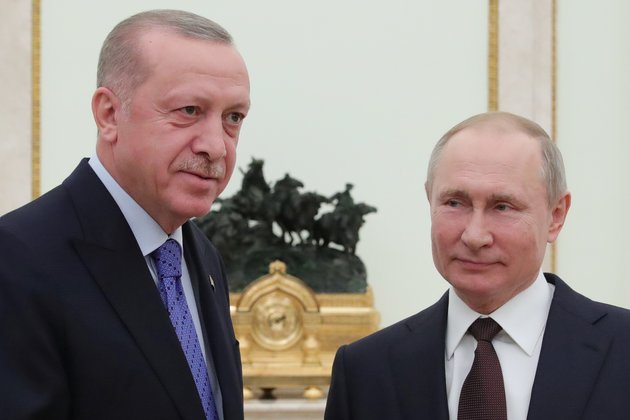 ISTANBUL - Turkish President Recep Tayyip Erdogan is standing by his Russian counterpart, Vladimir Putin, despite escalating tensions between them over Syria.

"It is incompatible with Turkey's role as a NATO partner, and it would produce serious consequences with respect to the U.S. CAATSA (Countering America's Adversaries Through Sanctions Act)," Satterfield said, warning that Congress could impose sanctions in the "not-distant future."

In the face of Washington's threats, Erdogan pledged this month to activate the system in April.

Washington initially threatened to sanction Turkey on the delivery of the S-400. But in a widely interpreted gesture to Ankara, the threat of sanctions were instead linked to the activation of the missile system.

Erdogan's determination to go ahead and activate the system is likely to be a blow to Washington's efforts to improve ties with its NATO ally.

Ankara's deepening relationship with Moscow is causing alarm with Turkey's western allies. However, recent rising Turkish-Russian tensions over Syria are fueling speculation of Turkey pivoting back to the West.

"Turkey never left the West, from the very beginning. Turkey will stay with the West. All these appearances with Russia are periodical and not permanent, and this period is probably, in general terms, over, and Turkey will return to the West, said Bagci.

While Ankara and Moscow back rival sides in the Syrian civil war, they have been cooperating to end the conflict. But that cooperation started to break down over Idlib, Syria's last rebel stronghold. Last month, Turkish troops intervened to back rebels faced with being overrun by Russian-backed Syrian government forces.

Earlier this month, Erdogan went to Moscow to hammer out an Idlib cease-fire agreement with Putin. In a widely reported snub, Putin kept Erdogan waiting in front of TV cameras before his meeting.

Observers, along with western diplomats, are warning that the cease-fire is also likely to be a temporary affair.

"We don't believe they (Damascus and Moscow) have any interest in a permanent cease-fire in Idlib," Jeffrey said. "They are out to get a military victory in all of Syria. Our goal is to make it very difficult for them to do that by a variety of diplomatic, military and other actions."

But Erdogan is showing little signs of abandoning his relationship with Putin.

"Erdogan is not ready to give up on the Turkish-Russian relations and his very personal relationship with Vladimir Putin," said Asli Aydintasbas, a senior fellow at the European Council on Foreign Relations.

"In the end, it is not Turkey so much, but Erdogan who appears reliant on Moscow," said analyst Atilla Yesilada of Global Source Partners. "This suggests that even when extremely vital national interests, such as the defense of Idlib, are at stake, Erdogan prioritizes his anti-Western ideology to optimal policymaking."

But it's Washington's reluctance to back its words of support with action and willingness to confront Moscow that other analysts explain Erdogan's reticence to pivot away from Moscow.

"There has been a reluctance on the part of both the United States and NATO to commit militarily in Syria," Aydintasbas said. "So, while Turkey has ample political support with politicians and officials lining up to criticize Russia and praise Turkey for its work, in Syria, there is no substantial military backing nor any desire to get involved in the Syrian war or confront Russia, in order to create a safe zone in Syria."

Erdogan is seeking to create a safe zone in Idlib protected by a no-fly zone. The zone would provide a sanctuary to rebels and their families, averting a new exodus of refugees into Turkey.

Washington backs the idea but remains ambiguous over what support it's prepared to give.

"We are looking at ways to assist Turkey. That's why we are here," said Jeffrey. "Everything is on the table. We will see what happens next and what our allies are willing to put on the table, and will see what the United States can do to support them."

But observers claim a broader lack of trust between Ankara and Washington is also an obstacle to improving ties. The U.S.-led war against Islamic State relies on supporting the YPG, a Syrian Kurdish militia designated by Turkey as terrorists.

"Hopes of Turkey pivoting back to the United States are definitely misplaced, because for Erdogan and Ankara, the U.S. position in particular in relations (to) the YPG is unacceptable. It's an anathema for Ankara," said former senior Turkish diplomat Aydin Selcen, who is now an analyst for Mediascope.

Ankara's suspicions of Washington's motives continue to corrode relations. Turkish prosecutors are still filing cases over the 2016 failed coup that accuse America of being involved.

Analysts suggest such mistrust will likely mean Erdogan will continue to look to Moscow.