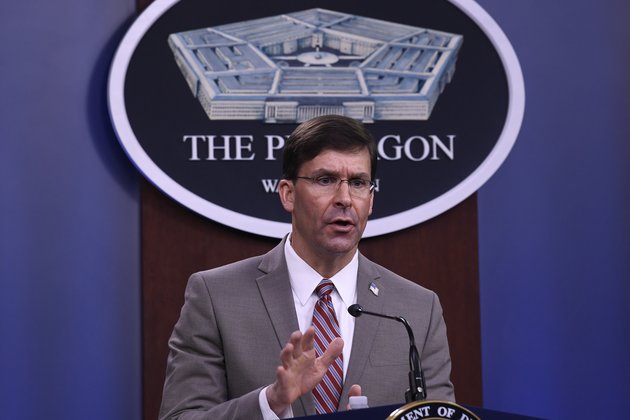 PENTAGON / WASHINGTON - Secretary of Defense Mark Esper said Thursday that "all options are on the table" to respond to the deadly rocket attack on an Iraqi base housing U.S. and coalition troops, which the United States said was carried out by Iranian-backed forces.

"The U.S. will not tolerate attacks against our people, our interests or our allies," Esper told reporters at the Pentagon. "We've got to hold the perpetrators accountable. You don't get to shoot at our bases and kill and wound Americans and get away with it."

Two Americans and a British service member were killed, with 14 American, British and Polish nationals wounded Wednesday when a barrage of rockets slammed into Camp Taji, a military base north of Baghdad.

Army General Mark Milley, chairman of the Joint Chiefs of Staff, said five of the wounded had "urgent" injuries from shrapnel.

Iranian-backed forces fired about 30 Katyusha rockets, with between a dozen and 18 hitting the base and causing "structural damage to facilities. It was a significant attack," Milley said.

Esper said he had spoken with President Donald Trump about Wednesday's attack but would not elaborate on any retaliatory options presented to him. Trump, speaking Thursday to reporters at the White House, also would not give any details about a potential U.S. response.

Barrage of Rockets Target Iraqi Base, Killing 2 Americans, 1 Brit U.S. officials suspect Iranian-backed militias are behind the barrage of Katyusha rockets that struck the base late Wednesday

General Kenneth McKenzie, commander of U.S. Central Command, which oversees U.S. military operations in the Middle East, told the Senate Armed Services Committee the attack was under investigation, but he noted that Iranian-backed terror group Kataib Hezbollah was "the only group known to have previously conducted an indirect fire attack of this scale against U.S. and coalition forces in Iraq."

When pressed by reporters to name the group who was responsible for the attack, Milley said, "We could, but we're not. We know with a high degree of certainty, but we're not going to mention that publicly right now."

Esper added that naming the group responsible was an "operational intelligence matter that we're not going to talk about at this time."

In a statement Thursday, Kataib Hezbollah praised the attack on Camp Taji but declined to claim responsibility.

"Bless those who implemented the precision jihadi operation," the group said, according to a translation by the SITE Intelligence Group.

"We hold their hands," it added, saying "now is the most appropriate time for the national and popular forces to resume their jihadi operations to drive out the wicked ones and aggressors from the land of the sanctities."

Iraqi military officials, who were the first to share word of the rocket attack, tweeted photos of an abandoned truck that they said was found nearby.

Iraq's presidency condemned the "terrorist attack" in a Thursday statement and stressed the need to find those responsible.

Iranian-backed militias in Iraq have targeted U.S. and coalition forces before.

In December, an attack by the Kataib Hezbollah militia killed a U.S. contractor at a base near the oil-rich city of Kirkuk. The U.S. responded with a series of retaliatory strikes, culminating in January with the killing of Qassem Soleimani, the Iran Quds Force commander who oversaw the militias, in a strike in Iraq.

Iran retaliated by firing more than a dozen ballistic missiles at the al-Asad airbase, which hosts U.S. and coalition troops in Iraq, causing more than 100 U.S. troops to suffer traumatic brain injuries.

Since the Iranian missile attack, the Pentagon has been negotiating with the Iraqi government to send in Patriot missile defense batteries.

Appearing before U.S. lawmakers this week, McKenzie said the U.S. was "in the process of bringing in" the missile defense systems, and he warned the threat from Tehran had not diminished.

"Ample intelligence indicates the [Iranian] regime's desire to continue malign activities," he said. "Going forward it is CENTCOM's objective to posture forces in the region with the operational depth to achieve a consistent state of deterrence against Iran."

British Prime Minister Boris Johnson confirmed that a British soldier had been killed in the attack and said Britain was consulting with the U.S.

"Our servicemen and women work tirelessly every day to uphold security and stability in the region - their presence makes us all safer," Johnson said in a statement. "We will continue to liaise with our international partners to fully understand the details of this abhorrent attack."