Astronauts Returning to a Changed Earth Amid Pandemic 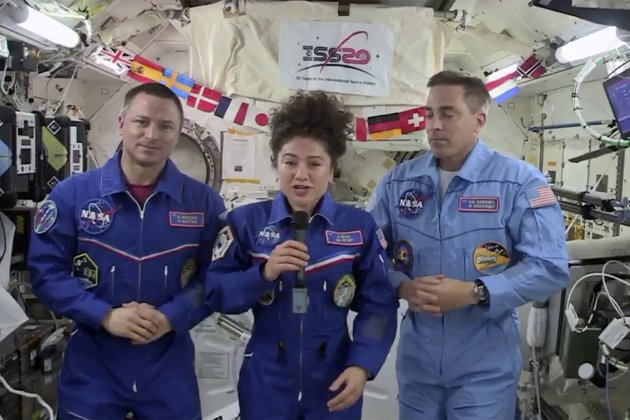 Two U.S. astronauts say it's hard to comprehend the changes on Earth that have occurred due to the coronavirus pandemic, as they prepare to return from the International Space Station.

The astronauts, Andrew Morgan and Jessica Meir, have been in space for more than half a year, having left Earth before anyone had ever heard of the coronavirus, let alone gotten sick or died.

Morgan said Friday from the space station that the crew has been trying to keep up with developments about the virus, but said, "It's very hard to fathom" all that is going on.

Morgan, who is an Army emergency physician, said he feels a little guilty returning to Earth when the crisis is already underway.

Meir said, "We can tell you that the Earth still looks just as stunning as always from up here, so it's difficult to believe all the changes that have taken place since both of us have been up here."

"It is quite surreal for us to see this whole situation unfolding on the planet below," she said.

Morgan said the pandemic has affected operations at NASA's mission control, with the handover taking place "between shifts between two different rooms to minimize the contact." He said NASA staff members are persevering through "their ingenuity and their professionalism" and said, "They're going to return us to Earth safely, just like their predecessors did 50 years ago."

The two U.S. astronauts, along with a Russian cosmonaut, Oleg Skripochka, will return to Earth on April 17, exactly 50 years after the U.S. Apollo 13 mission returned to Earth.

That mission faced a crisis when the spacecraft's oxygen tank ruptured two days into the trip, aborting the astronauts' mission to the moon.

"Once again, now there's a crisis, and the crisis is on Earth," Morgan said.

Meir said she is looking forward to seeing her family and friends again, even if just virtually. She said she expects to feel more isolated on Earth than in space.

"We're so busy with so many other amazing pursuits and we have this incredible vantage point of the Earth below, that we don't really feel as much of that isolation," Meir said.

Meir has been in space since September and Morgan since last July. They will return in a Soyuz capsule, landing in Kazakhstan.

The Americans will leave three astronauts who arrived at the space station Thursday -- NASA's Chris Cassidy and Russians Anatoly Ivanishin and Ivan Vagner.

The launch of a Russian Soyuz rocket carrying those astronauts was carried out under tight restrictions because of the coronavirus. Support workers wore masks and kept their distance from the crew to prevent the possibility of the virus being taken to the space station. The crew members, who routinely go into quarantine ahead of launch day, stayed in isolation longer than normal because of the virus.

Cassidy said Friday from the space station, "we knew as a crew we were going to be in quarantine about nine months ago or a year ago, those exact weeks, but we didn't know the whole rest of the world was going to join us."

Following Thursday's launch, NASA Administrator Jim Bridenstine tweeted his congratulations. "No virus is stronger than the human desire to explore," he said.

The next astronauts who visit the space station will be launched by SpaceX from Florida's Kennedy Space Center, as early as next month. It will be the first launch of astronauts to the space station from the United States since NASA's space shuttle program ended in 2011.