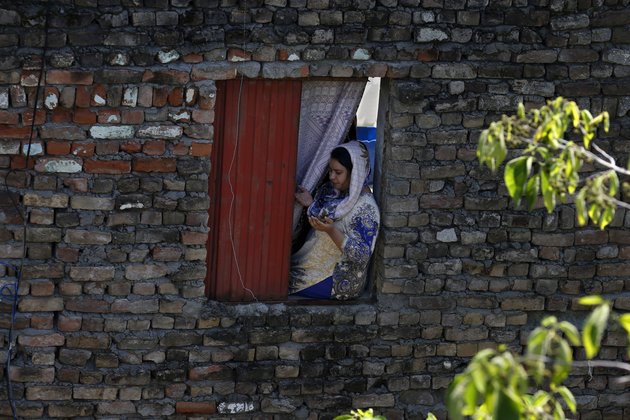 ISLAMABAD - This was the first time in 35 years that Venus and her husband could not attend the Easter Sunday prayers in the Roman Catholic Church in Pakistan's capital, Islamabad.

"All the Christians in our neighborhood wanted to go for prayers, but the security was really tight," she said, preferring to use a single name to protect her identify.

Pakistan's government has ordered a shutdown amid the coronavirus outbreak. The ban has left many residents, including Venus, dejected.

"These are special days of prayer for us. My heart was sad that I could not go to the place of God," she said.

In a separate Islamabad neighborhood, Mohammad Afzal says he feels empty when he cannot go to a mosque. The 55-year-old has been praying in a mosque five times a day for the past 16 years.

While mosques in Pakistan remain open, the number of people allowed to assemble for prayer is limited to five.

"Namaz (the Muslim prayer) is my passion. But praying at home just doesn't give me the same fulfillment. There is no feeling like going to a mosque and bending before God," Afzal said.

Despite their personal feelings, both Venus and Afzal agree with the government's restrictions as necessary to halt the spread of COVID-19 and save lives.

Religious gatherings have been the biggest cause of the spread of coronavirus in Pakistan. Muslim missionary group Tablighi Jamaat's gathering in Lahore last month, attended by tens of thousands of people, including foreigners, led to the spread of the virus in multiple cities.

Eventually, the group's centers throughout Pakistan had to be declared quarantine zones, with the government trying to track down all who attended the gatherings, and those who came in contact with the group.

Pakistan is not the only country banning large gatherings, including religious gatherings, to contain the spread of what might be one of the most infectious viruses known to humans.

In Vatican City this Sunday, Pope Francis celebrated Mass in an almost empty St. Peter's Basilica. Usually, the event is attended by tens of thousands of the faithful.

Experts around the globe say until a vaccine is developed, the best defense against the virus is to take preventive measures, including banning crowds and gatherings.

Nevertheless, Pakistani religious cleric Mufti Kifayatullah is defying that advice, maintaining that the best protection against the coronavirus is the power of prayer.

At his mosque in Mansehra, located approximately 110 kilometers north of Islamabad, a large number of worshippers gathered for Friday prayers last week.

"If you close your mosques, at least 20 million people will get infected with the coronavirus," he said. "I agree with all the precautionary measures the government has recommended but not with the restriction on attendance in mosques."

The cleric said he would disobey the government's restriction on prayer gatherings even if he got arrested.

While many religious leaders in Pakistan have supported the government in its efforts to control the spread of the virus, the partial closure of religious gathering places has also given rise to conspiracy theories.

Market research firm Ipsos found in a recent public survey that nearly 43% of Pakistanis believed the coronavirus was a conspiracy by America or Israel to weaken the Muslims.

"This is pure illiteracy," said Mansoor Ahmed of Rawalpindi, who said some people in his mosque held similar views and wanted to continue gathering for prayers.

"If a prayer causes the spread of infection, that prayer is harmful," he added.