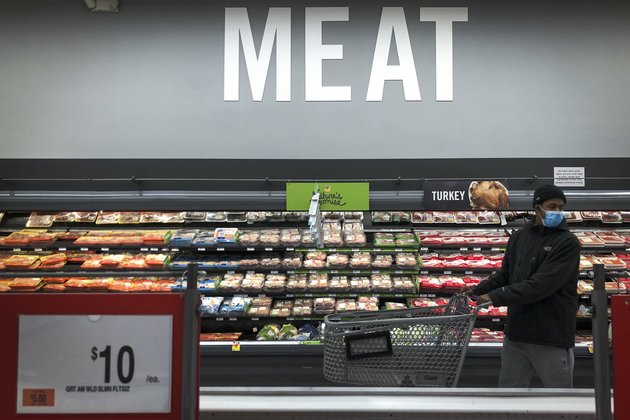 President Donald Trump will take executive action Tuesday to order meat processing plants to stay open amid concerns over growing coronavirus cases and the impact on the nation's food supply.

The order will use the Defense Production Act to classify meat processing as critical infrastructure to keep plants open and prevent a shortage of chicken, pork and other meat on supermarket shelves, despite concerns about workers' health.

The virus has forced two of the nation's largest plants, one in Iowa and one in South Dakota, to close and others to slow production.

The United Food and Commercial Workers International Union, which represents 1.3 million food and retail workers, said Tuesday that 20 food-processing and meatpacking union workers in the U.S. have died of the virus. An estimated 6,500 are sick or have been exposed to the virus while working near someone who tested positive, the union says.

As a result, industry leaders have warned that consumers could see meat shortages in a matter of days. Tyson Foods Inc., one of the world's largest food companies, ran a full-page advertisement in The New York Times and other newspapers Sunday warning, "The food supply chain is breaking."

"As pork, beef and chicken plants are being forced to close, even for short periods of time, millions of pounds of meat will disappear from the supply chain," it read.

Tyson Foods suspended operations at its plant in Waterloo, Iowa, and Smithfield Foods halted production at its plant in Sioux Falls, South Dakota, after an outbreak infected 853 workers.

The 15 largest pork-packing plants account for 60% of all pork processed in the U.S.

A senior White House official said the administration was trying to prevent a situation in which a "vast majority" of the nation's meat processing plants might have temporarily closed operations, reducing the availability of meat in supermarkets by as much as 80%.

The official, who spoke on condition of anonymity to discuss the order before its release, said the White House was also working with the Labor Department to provide enhanced safety guidance for meatpacking workers. That will include trying to minimize the risk to workers who may be prone to serious complications from the virus, including strongly recommending those over the age of 65 and with preexisting conditions stay home.

The five-page order, which was developed in consultation with industry leaders, is designed, in part, to provide companies with additional liability protections in case workers get sick.

Sen. Mike Rounds, a Republican from South Dakota, had written a letter to Trump asking him to use the DPA to declare the food supply industry an essential industry, warning that consumers would see a meat shortage in a matter of days akin to the panic over toilet paper the virus created.

But UFCW International President Marc Perrone said that more must be done to protect the safety of workers.

"Simply put, we cannot have a secure food supply without the safety of these workers," he said in a statement, urging the administration "to immediately enact clear and enforceable safety standards" and compel companies to provide protective equipment, make daily testing available to workers, and enforce physical distancing, among other measures.

Stuart Appelbaum, president of the Retail, Wholesale and Department Store Union, said the administration should have acted earlier to put safety measures in place.

"We only wish that this administration cared as much about the lives of working people as it does about meat, pork and poultry products," he said.

Indeed, concerns about working conditions have led some to walk off the job. In central Minnesota, some workers at the Pilgrim's Pride poultry plant walked out Monday night to protest the company's record on worker safety.

Mohamed Goni, an organizer with Greater Minnesota Worker Center, said workers have complained the company is not sharing information about sick colleagues, has not implemented social distancing on the line, and that workers who were sick returned after just two or three days, and some workers who developed symptoms were not allowed to leave when they asked to go home.

"The company refused, saying there would be a shortage of workers," Goni said, adding that 80% to 85% of the plant's workers are Somali.

"They have other family members living with them - elderly, children, people with underlying conditions. So if one of them brings that to their homes, it's going to be more worse and a more serious problem," Goni said.

Cameron Bruett, head of corporate affairs for JBS USA and Pilgrim's, said in an email that employees are never forced to work or punished for an absence due to health reasons.

"We will endeavor to keep our facilities open to help feed the nation, but we will not operate a facility if we do not believe it is safe. The health and safety of our team members remains our number one priority," Bruett said.

In South Dakota, Gov. Kristi Noem has said she hopes to see a reopening plan for Smithfield this week, but sidestepped questions Tuesday about whether she agreed with Trump's order, which might have prevented the Sioux Falls plant from shutting down if it had been in place earlier.

"We need to keep (plants) running, but we also need to protect people," Noem said.