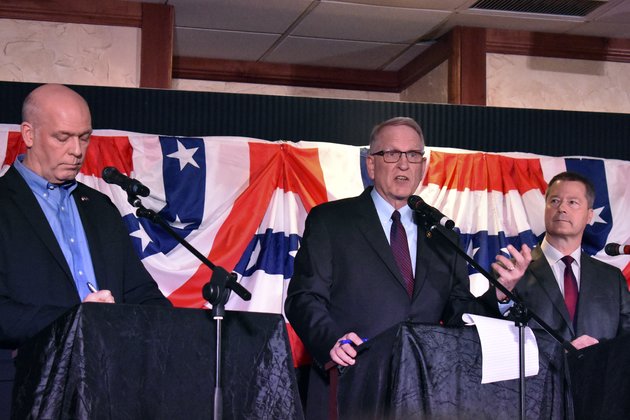 BILLINGS, MONTANA - Montana's Republican primary for governor is getting increasingly acrimonious as Attorney General Tim Fox steps up his attacks on Rep. Greg Gianforte for avoiding public appearances and sinking more than $1 million of his own money into the campaign.

Gianforte, the presumed front-runner who had largely avoided attacks on Fox and Sen. Al Olszewski, struck back forcefully during a virtual debate on Saturday night in which he called Fox's accusations "shameful."

"It is shameful because he's trying to manipulate and use false statements to manipulate voters and I'll just leave it at that," said Gianforte, a former technology executive who challenged Gov. Steve Bullock four years ago and lost.

Fox noted that Gianforte had missed two debates in the lead up to the June 2 primary and said the congressman was "social distancing long before the pandemic hit."

"You've ducked debates and forums, refused interviews with the press, avoided open public meetings and tough questions, and instead, used your considerable wealth to try to buy this election instead of earning those votes," Fox said.

Olszewski said his experience as a physician and small business owner made him well suited to lead the state as it grapples with the public health and economic challenges of the coronavirus pandemic. The Kalispell lawmaker also reiterated his opposition to a water compact for the Confederated Salish and Kootenai Tribes and promised to renegotiate the deal if elected governor.

Saturday's debate was conducted via video conference and sponsored by the Montana Broadcasters Association and the Greater Montana Foundation.

Lt. Gov. Mike Cooney and Missoula businesswoman Whitney Williams faced off in a separate debate as they seek the Democratic nomination in the race.

Williams criticized the Bullock administration for allowing school districts the choice to reopen amid the pandemic. But Cooeny defended the move and said the administration has handled the public health crisis well.