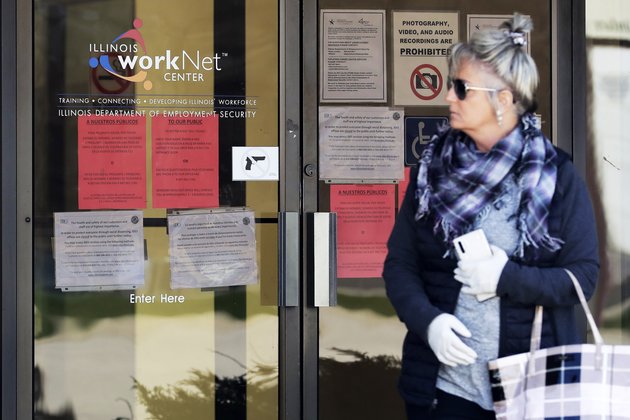 WASHINGTON - The surge of unemployment compensation claims eased a bit in the U.S. last week, the Labor Department reported Thursday, but nearly another 3 million workers still sought benefits as the coronavirus pandemic continues to batter the world's largest economy.

In two months now, 36.5 million jobless workers have filed for compensation, more than one of every five employees in the U.S. labor force of more than 164 million.

The government last week said the official April unemployment rate was 14.7%, but key Trump administration economic officials say it likely is higher and could approach 25% in the coming weeks. The government says the national economy dropped 4.8% in the first quarter, but that was before the full impact of the pandemic became apparent.

Congress and President Donald Trump have already authorized $3 trillion in aid to most Americans and businesses. The Democratic-controlled House of Representatives wants to boost the assistance even further, but Republican lawmakers are balking, while the president has adopted a wait-and-see stance.

Trump, in an interview Thursday on Fox Business, contended that Democrats want to see the American economy fail to bolster the chances of former Democratic Vice President Joe Biden to defeat him in the November presidential election.

"The less successful we are in reopening, the better they are, maybe for an election," the president said. "They would rather see our country fail, and you know what that means, because part of failure is death, than have me get elected."

White House economic adviser Kevin Hassett said the latest number of new unemployment compensation claims - 2.98 million, the lowest figure in eight weeks --was "better than expected" and likely showed some improvement in states where governors have begun to reopen their economies.

"The fact that we came in under 3 million suggests that the turning on of the economy is beginning, and it's beginning to show up in the data," Hassett said.

But he said his "fear is that the places that stay closed could have skyrocketing claims" for jobless benefits, while "the places that turn back on will have claims go back down toward normal."

Federal Reserve Chairman Jerome Powell, head of the country's central bank, warned Wednesday that the American economy could endure a multi-year recession if more aid is not authorized for workers. He said that 40% of American households earning less than $40,000 a year lost jobs in March.

"Additional fiscal support could be costly but worth it if it helps avoid long-term economic damage and leaves us with a stronger recovery," Powell said in a videoconference with the Peterson Institute for International Economics.

He called the upheaval in the U.S. the "biggest shock our economy has felt in modern times," saying the country is likely to face an "extended period" of weakness.

"The record shows that deeper and longer recessions can leave behind lasting damage to the productive capacity of the economy," Powell said. "Avoidable household and business insolvencies can weigh on growth for years to come."

Treasury Secretary Steven Mnuchin and other Trump economic advisers say the downturn is significant but are predicting an upswing in the second half of the year, continuing into 2021. Nonetheless, the Congressional Budget Office is predicting that the country's unemployment rate will still be at 9.5% at the end of next year.

U.S. workers filing for jobless benefits normally are paid slightly less than half their normal salaries. But these payments are currently being augmented during the pandemic with $600-a-week supplements from the federal government for four months.

The peak of the unemployment benefit claims may have come in late March with 6.9 million workers filing for the jobless compensation.

The weekly pace of claims has diminished each of the last eight weeks since then, but the millions of claims have still been unparalleled over decades of U.S. economic history, reaching back to the Great Depression in the 1930s. The number of claims has far exceeded those made during the Great Recession in 2008.

Still, U.S. commerce is slowly edging back to life even as the U.S. coronavirus death toll has topped 84,000, the biggest national total across the world, and the number of confirmed coronavirus cases totals nearly 1.4 million. The projected U.S. death toll is 147,000 by August.

Governors throughout the 50 U.S. states have moved toward reopening of parts of their economies, in some cases telling restaurant owners they can reopen if they maintain safe two-meter distancing between customers or let shop keepers reopen if they limit the number of customers at any one time.

In some instances, Americans eager to escape the weeks-long confinement of their homes have crowded into restaurants whose owners have defied orders to limit the number of people they could serve. The customers have rarely worn masks to curb the possibility of infecting others.

Some factories could reopen later in May, although it is not clear how workers will be able to maintain safe distancing to limit their chances of catching the virus.