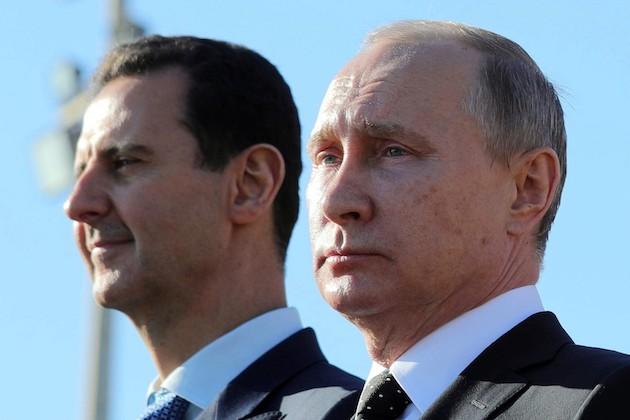 Russia's relationships with its client states have never been easy. Of course, managing client states is always a complicated exercise. The Kremlin's cupboard is full of skeletons-Hungary (1956), Czechoslovakia (1968), Cuba (1962), Afghanistan (1980), Ukraine (2014) and so on.

What complicates Russia's relationship with Syria, which has sometimes been referred to as a Russian client state, is that two strong-willed, highly self-opinionated leaders are also involved here-Russian President Vladimir Putin and President of Syria Bashar al-Assad. Both enjoy unshakeable clan support and can hold their ground. Assad is by no means a Russian protege, and the interests of the two countries do not always overlap, either.

The Syrian government is fighting an existential battle, and it sees no reason to barter away its hard-earned victories in order to accommodate implacable enemies who refuse to reconcile with defeat and seek to snatch victory from the jaws of defeat. In sum, Assad is hell-bent on regaining Syria's sovereignty and restoring its territorial integrity, no matter what it takes or the timeline involved-preferably with Russia's help and cooperation. Assad is clear-headed that unless he achieves this objective, the predatory powers will not leave him in peace.

The Kremlin, on the contrary, has multiple goals, including objectives that are unrelated to the Syrian situation. These range from vanquishing the terrorist groups that include extremist elements from Russia's restive Muslim population to Russia's resurgence as a military power with the capability to fight expeditionary wars.

The intervention in Syria has signified post-Soviet Russia's "return" to the eastern Mediterranean, while the establishment of permanent Russian military bases in Syria has assertively proclaimed Moscow's intention to play the role of arbiter in Middle Eastern affairs. And all this while hoping to achieve a level of engagement with the U.S., which would give gravitas to the rocky Russian-American relations and reduce Russia's tensions with Europe.

Evidently, the divergent priorities need to be harmonized, as it is in the mutual interests of the two sides that differences are tackled with patience, care, and sensitivity. Bringing them to the public domain can only be counterproductive, as adversaries waiting in the wings are keenly watching for just such opportunities to create discord and acrimony in the Russian-Syrian alliance.

However, Moscow recently broke this golden rule, even as writings began appearing lately, penned by Russian think-tankers and opinion-makers that carry the stamp of the Kremlin, voicing criticism of the Syrian government, including President Bashar al-Assad.

Among them, the most notable, perhaps, was the article titled "War, the Economy and Politics in Syria: Broken Links" penned by the former Russian ambassador to Syria Aleksandr Aksenenok, who is also vice president of the influential Russian International Affairs Council (affiliated with the foreign ministry).

The article was patently written with an eye on the Western audience to convey a sense of annoyance toward Assad and signaled Moscow's wish that his regime ought to switch its priorities from reconquering all of Syria to pursuing post-war development in the approximately 65 percent of the country that it controls at present.

The Kremlin's viewpoint appears to be that it cannot continue to bankroll the war, and there is an imperative need to motivate the West and the Gulf Arab states to provide the funds for Syrian reconstruction. A high degree of frustration in Moscow is palpable in Aksenenok's imputation that vested interests in Damascus could be seeking continuation of the war. He wrote:

"The war produced centers of influence and shadow organizations that are not interested in a transition to peaceful development[,] although Syrian society, including businesspeople and some government officials, have developed requirements for political reform However, this requirement cannot be expressed openly in an atmosphere of total fear and domination by the secret services."

Such glasnost in Russia is rare, and it has caught wide attention (here, here and here). Of course, it was a highly damning allegation that Assad is surrounded by war profiteers.

As sure as night following the day, Damascus hit back. A prominent Syrian political personality credited with close links to the country's security establishment, Khaled al-Aboud launched a tirade in early Mayagainst Russia and Putin. Al-Aboud wrote, inter alia, "If Assad wanted it, Putin would have ended, and not just in Syria but in the region and the world, and the name 'Putin' would have been erased from Russian history forever."

Significantly, al-Aboud also showered praise on the role of Iran and Hezbollah and estimated that Assad gives precedence to relations with Tehran over Syria's ties with Moscow.

The Russian motivation seems to be threefold. One, Putin seems frustrated that the military victories have not opened a pathway to political settlement in Syria-whereas Moscow is desperately keen to garner the victory in political and economic terms. Assad's fixation about total victory is not helping matters.

Two, integral to the above, stabilization of Syria demands repair and reconstruction of the economy requiring massive financial investments, which Russia has no capacity to undertake. But the petrodollar states of the Persian Gulf are in a position to help, and some of them, especially the United Arab Emirates, are normalizing their relations with Damascus.

A greater degree of pragmatism on Assad's part to share power with the erstwhile extremist groups mentored by the Gulf states might help. But Assad is unwilling to accommodate the rebel fighters except on his terms, which is that they should simply lay down arms and he will give them a fair deal.

Three, Moscow has every reason to be wary of a bear trap that the U.S. military may set up for Russian forces in Syria. The U.S. has trained and armed proxy groups and has been supplying them with sophisticated weapons. The U.S. military presence in northern Syria and on the borders with Iraq is showing signs of being open-ended, no matter what President Trump might have said.

A quagmire like in Afghanistan is the last thing Moscow wants. Speaking at a video event on May 12 that was hosted by the Hudson Institute, a conservative think tank in Washington, the U.S. special envoy for Syria James Jeffrey openly bragged that his mission is principally focused on bleeding the Russian forces and evicting them from the region.

Jeffrey said, "Our military presence, while small, is important for overall calculations. So we urge the Congress, the American people, the president to keep these forces on, but again this isn't Afghanistan, this isn't Vietnam, this isn't a quagmire My job is to make it a quagmire for the Russians."

Jeffrey noted that "the Russian military has been successful in Syria, but argued 'they don't have a political way out of their problems'" with Assad. In some previous remarks made in March, Jeffrey was also on record while stating that "the U.S. aims to 'make it very difficult' for Russia to help the Syrian government achieve a military victory." Jeffrey has been insisting that "Assad must go."

Such provocative remarks and taunts, taken together, must be ringing alarm bells in Moscow. On the one hand, Turkey and the U.S. are blocking a total military victory in Syria while on the other hand, Assad will not settle for anything less than total victory and, as Josh Rogin wrotein the Washington Post, "Iran sees Syria as part of its 'axis of resistance' against the [U.S.] and Israel."

Simply put, Russia has gambled and lost: in the final analysis, the U.S. and its European allies refuse to accept the prospect of Assad remaining in power, although they lost the proxy war.

Jeffrey's pointed reference to "quagmire" opens deep wounds in the Russian psyche. The Russian public will never condone such an outcome in Syria, and the raison d'tre of the intervention in 2015 will come under close scrutiny sooner or later if the present stalemate continues.

Meanwhile, the Russian economy has come under stress due to a combination of circumstances following the COVID-19 pandemic, which has led to the steep fall in demand for oil and a consequent heavy loss of income from oil exports at a juncture when the Russian economy will need substantial fiscal stimulus to cope with the recession.

Russia has no choice but to accept the reality that Assad may be an imperfect partner, but is nonetheless a partner. The economic cost of that partnership is sustainable, too. The intervention in Syria as such has been a boon for Russia's geo-strategy.

The military victories in Syria have brilliantly advertised Russia's credentials as an exporter of weaponry. In political and diplomatic terms, Russia's relationships with Iran, Turkey, Israel, and the Gulf states have all deepened, and its prestige in the region has been greatly enhanced. The military bases in Syria provide a permanent presence for Russia in the Middle East for decades to come.

Without a doubt, Russia and Assad make indispensable partners for the time being. Putin must set aside his ambition to play the role of a peacemaker in Syria. It is for the Syrian people to decide on their future government.

Fundamentally, Russia keeps pining for constructive engagement by the U.S., but Washington has no interest in working with Moscow. Russia is a toxic subject in the Beltway. The U.S. wants Russia to vacate its military bases in Syria, and it perceives the Russian presence in the Mediterranean as a challenge to NATO and finds it unacceptable. The sooner Moscow recognizes this geopolitical reality, the easier it becomes for the "Westernists" among the Russian foreign-policy elite to purge their illusions.

Yet, the pathetic part is that Assad's trust in Putin must be badly shaken. Moscow has been less than fair to Assad by speaking ill of him behind his back-and that too to Jeffrey. At least, that is what Jeffrey kept insinuating in an exclusive interview recently with the Saudi establishment daily Asharq Al-Awsat.

Moscow's bad faith can only tarnish its reputation in the Arab bazaar. Running with the hare and hunting with the hound never presents a pleasant sight to the audience, especially when a great power resorts to it.

This article was produced in partnership by Indian Punchline and Globetrotter, a project of the Independent Media Institute.

The writer M. K. Bhadrakumar is a former Indian diplomat.