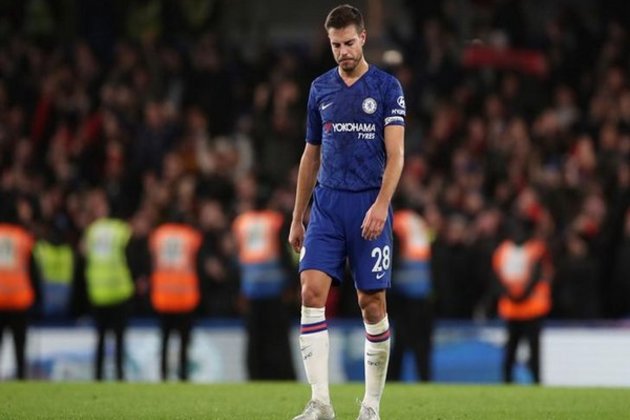 London [UK], June 3 (ANI): Chelsea captain Cesar Azpilicueta on Tuesday called for the eradication of racism from society as he, along with his teammates, showed support for the 'Black Lives Matter' movement ahead of their training session.

"It is something where we want to use our position to express that we are living in a world where we have to try to improve it for the future, to be a better world with more love, without hate," the club's official website quoted Azpilicueta as saying.

"We have seen recently the result of racism and we see every day that that kind of hate has to be eradicated from society, and we have to play our part," he added.

Chelsea players and coaching staff had formed the letter H, for humans, and knelt to show of support for the 'Black Lives Matter' movement.

Protests erupted in Minneapolis and other US cities after George Floyd, an African-American man, died following his arrest by the police. A viral video showed a police officer, Derek Chauvin, pinning the 46-year-old Floyd to the ground with his knee on his neck for nearly eight minutes. Floyd died at a local hospital shortly thereafter.

The four police officers were fired. Chauvin was also charged with murder and manslaughter, according to Hennepin County Attorney Mike Freeman.

Azpilicueta further stated that they want to leave the young generation with a better world, without any kind of discrimination or racism.

"There is every day the possibility to lead by example, to behave, to educate the children into a better world because we know that education is key for the future," he said.

"We know the young generation is coming behind us and we want to leave them in a better world with more possibilities without any kind of discrimination or racism, so everything matters and it is time to speak up and to face up to the attitudes that we are seeing. There is no place for all of this," Azpilicueta added. (ANI)