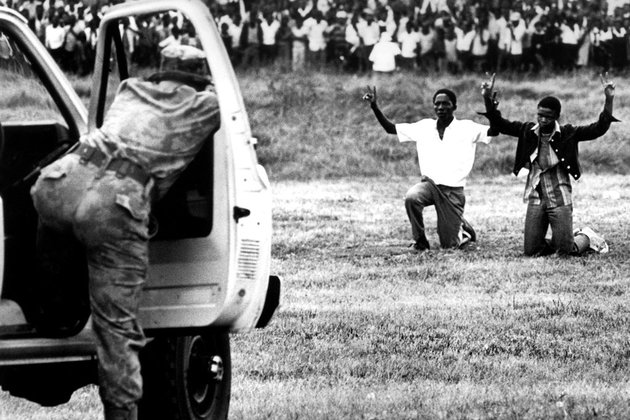 The last 20 days since the slaying of George Floyd in the USA has been a revelation, with an outpouring of humanity all around the world, a solidarity that is long overdue.

As a South African, I reflect on my life as part of the oppressed majority that endured the harshness of legislated racism: apartheid. Brutality, oppression and violent authority were the tools of perpetrators, those who had the protection of the law and who used it very effectively, that cost thousands, mostly black people, their lives.

It was during this period that our leaders, Nelson Mandela and others, were incarcerated and organisations under the banner of liberation movements were banned. But, no matter how powerful, armed and hateful the regime was, we always knew that one day our freedom would come. In 1961, Nelson Mandela said: "No power on earth can stop an oppressed people determined to win their freedom."

Reflecting on these inspiring words, in 1985 I made the first ever anti-apartheid film in South Africa and did it while being pursued by the police's Special Branch. It is the story of a black farmworker who dares to ask his white right-wing employer for more supplies because he cannot manage with what has been given. And that simple gesture ends with his murder. The film follows the unsuccessful attempts to have the farmer charged, but even when a sympathetic clergyman switches sides, nothing happens. It is clear, then, that the matter can only be resolved by anarchy.

I refer, of course, to , a film I managed to get released in the USA, its premiere in New York attended by Martin Luther King Jnr III and several other civil activists.

At the time, I did several local and national radio interviews and what struck me most was the strong and powerful voice of black people across America who had seen the film and compared the atrocity of what we were experiencing in South Africa to their own even during those days.

It was clear that racism was alive and well in many communities across the USA. For me, that came as a shock, but what is even more disturbing for me now, in 2020, is that the situation has not changed.

My body of work in film has been largely dedicated to telling stories, stories that celebrate the people and events of our liberation. One such narrative is that of the black youth who rebelled against the authorities when they were forced to learn Afrikaans, the language of the oppressors.

On 16 June 1976, a cold winter's day, students in Soweto marched to deliver a petition to the education authorities. It was then everything fell apart. They were met with police brutality, 69 individuals killed for their convictions.

We salute these young heroes today, the 44th anniversary of one of the most harrowing incidents in South Africa's history. was the film I made saluting these young heroes. These teenagers put their lives on the line and were at the forefront of the liberation - they are the heroes of our struggle.

In the past weeks, we have seen people around the world stand up against the brutality that led to the killing of George Floyd, Rayshard Brooks and so many others whose names are not known to us.

The tipping point for our freedom may have been in 1976, but it would be another two decades before those ideals were realised. I hope that the actions and introspections required today provide quicker outcomes. We simply cannot continue to lose any more lives.

What is of significance today is that now there are protests around the world, and we are able to see the unanimity of support from all race groups, particularly among the youth, in the almost global stand against discrimination, gender-based and all forms of violence. It is these individuals who are taking the future into their hands, and that this is finally finding a foothold in other sectors, such as the environment, and in support for green resources, bodes very well for the future.

Good values, ethnics, morals and kindness have been subjugated by arrogance, greed, hypocrisy and dishonesty. And it is this that has led to the growth of the right-wing nationalism in so many countries around the world.

My film is based on the autobiography of Nelson Mandela. On 5 August 1962, he was arrested and incarcerated, sentenced to life in prison, and serving a total of 27 years. During his imprisonment, he identified as a key pillar to our freedom, and a way in which our people can come together as a unified nation, the need to dispel the fear of the white minority, the fear that black South Africans would seek revenge. To this end, when Mandela stepped out of that prison, he forgave all who had visited this great injustice upon his people, his colleagues and comrades, and to him.

These are the words Mandela spoke when he was released on 10 February 1990:

To be free is not merely to cast off one's chains, but to live in a way that respects and enhances the lives of others.

Ubuntu is a South African saying, a notion that suggests that simply . That we are all connected, that we need each other to exist. That our every action has an effect on the humanity of the world. Today, ubuntu is more relevant than it has ever been.

As I look at the United States today and its journey to so-called "freedom" for all who live in it, I am able to reflect on the cruelties meted out not only to its indigenous First Nations people, the near annihilation of those communities, but also to its slave population, predominately from Africa and the Caribbean, their violent oppression and so-called subsequent emancipation. It has all been largely part of "the show". Racism has continued to thrive across America, violence and brutality the undiscussed norm - until 26 May 2020.

Now we have an all-embracing global community, mainly young people, protesting for change across the world and we are beginning to see, for the first time ever, symbols such as the Confederate flag and perpetrators of violence being called to book, with even their likenesses being torn from their pedestals of power.

It seems to me that this is the introspection that is needed. Sadly, even in my own country, now in the 82nd day of lockdown, the violence against our people has once again been largely by those in authority, this time being police and military. That these spheres of public service are dominated by black officials is a particularly tragic irony.

On 10 May 1994, Nelson Mandela was inaugurated as the first democratic president of South Africa. In his inauguration address, he said: "We have triumphed in the effort to implant hope in the breasts of the millions of our people. We enter into a covenant that we shall build the society in which all South Africans, both black and white, will be able to walk tall, without any fear in their hearts, assured of their inalienable right to human dignity, a rainbow nation at peace with itself and the world." His was a profound message for all South Africans, one that should continue to be embraced by us and all people of the world.

While Mandela was still in prison, I planned to make a film of one of South Africa's most prolific books, , written by Alan Paton almost 100 years ago in which he added his voice to our freedom and formed the Liberal Party.

The closing lines in both the book and the film are: "For it is the dawn that has come, as it has come for a thousand centuries, never failing. But when that dawn will come, of our emancipation, from the fear of bondage and the bondage of fear, why, that is the secret."

Prophetic words ringing true today, for all the people of the world.