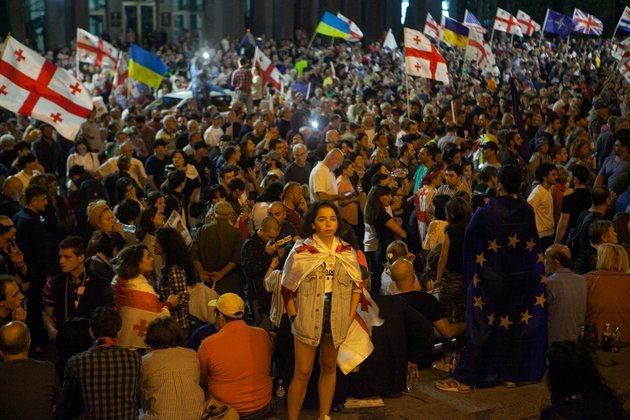 Georgia's opposition has formed a united front for the upcoming parliamentary vote, as it attempts to regain its footing after the ruling party got a boost from its response to the coronavirus pandemic.

An alliance of opposition groups - United National Movement, European Georgia, the Labor Party and New Georgia - announced on June 19 a joint slate of candidates who will compete in six district races in Tbilisi in parliamentary elections scheduled for October. Negotiations are underway to nominate joint candidates in the city's remaining two districts and, potentially, elsewhere in the country.

"We need to make sure that opposition parties prevail in all districts, especially in Tbilisi," said Nika Melia of the United National Movement, following the rollout of the plan. He said the joint effort is needed to bring down what he called "the oligarchy," referring to the rule of Bidzina Ivanishvili, billionaire chairman of the ruling Georgian Dream party.

By fielding joint candidates, the opposition hopes to defeat Ivanishvili at his own game.

By uniting around joint candidates, the allied opposition groups hope to present the public with a stark choice - the opposition or the government - rather than allowing voters to scatter their ballots among several smaller parties.

One of the leaders of European Georgia, Giga Bokeria, said that having joint candidates would boost the opposition's chances of winning these six districts. "If everyone calls on the protest vote to vote for a single candidate, the chances of winning in the first round are very high," Bokeria told the television station Mtavari Arkhi.

Georgian Dream members scoffed at the strategy. "These candidates' chances of winning in these districts are next to zero, but these are the best majoritarian candidates they have," said Sopo Kiladze, a member of parliament representing Georgian Dream.

The announcement of the joint parliamentary slate came on the eve of a planned rally to commemorate the one-year anniversary of a notorious crackdown on peaceful demonstrators, an episode that initially seemed to throw into doubt Georgian Dream's electoral future.

On June 20 of last year, protesters gathered in front of Georgia's parliament following the appearance of a Russian lawmaker, Sergey Gavrilov, in the speaker of parliament's chair that afternoon. Gavrilov had come on the invitation of Georgian Dream, and the sight of an official from Russia - considered by most Georgians to be an enemy state - making himself so at home sparked outrage.

Police used tear gas and rubber bullets on the protesters, leaving many civilians injured, some maimed for life. The clash also signaled a marked hardening of Georgian Dream's approach toward protesters, who often gather in front of the parliament. The evening has since become known as the "Gavrilov Night" and has become the rallying cry for the opposition against Ivanishvili and his party.

Polls last year showed steadily declining support for Georgian Dream, though it is not fully clear if the Gavrilov Night was the main driver. Support for the ruling party dropped 7 percent between April and November last year, which "is not a particularly large change," said Dustin Gilbreath, deputy director of the Caucasus Research Resource Group, which conducts polls sponsored by the U.S. National Democratic Institute (NDI).

Nevertheless, "a majority thought that the government handled the Gavrilov Night poorly and a plurality blamed the government for the violence of that night," Gilbreath told Eurasianet.

While no polls have yet been published on the question, analysts agree that the government's largely successful response to the COVID-19 outbreak has likely reversed that collapse in support.

The government's many pre-pandemic sins have become distant memories for a public under lockdown and reliant on the authorities for their safety. The country's response has been by far the most successful in the region, and even some Georgian Dream critics ended up siding with the government as it struggled to convince corona-skeptics, most notably the powerful Georgian Orthodox Church, to comply with the counter-pandemic measures.

The sense that Georgian Dream has regained its support has likely pushed the opposition groups, otherwise typically riven by personal and ideological differences, to unite.

Members of Georgia's parliament are elected through a mixed system that has both majoritarian seats, in which a single candidate wins in a particular district, and proportional seats, distributed between parties based on their respective shares of overall national support.

Under the current system, just under half of 150 seats in parliament are majoritarian. There is an ongoing push to change that system, with the opposition's goal to reduce the majoritarian share down to 30 seats, as the ruling party has a disproportionate advantage in the majoritarian races.

A broad political agreement on the change was reached on March 8 with the mediation of American and European diplomats. But the opposition has accused the government of walking back other elements of the agreement and has said it plans to boycott parliamentary hearings on electoral reform.

On the same day that the opposition announced its joint slate, the U.S. Embassy and EU delegation in Tbilisi made a joint statement calling on all sides to comply with the electoral reform agreement.