Tributes continue to flow in for fallen Garda officer 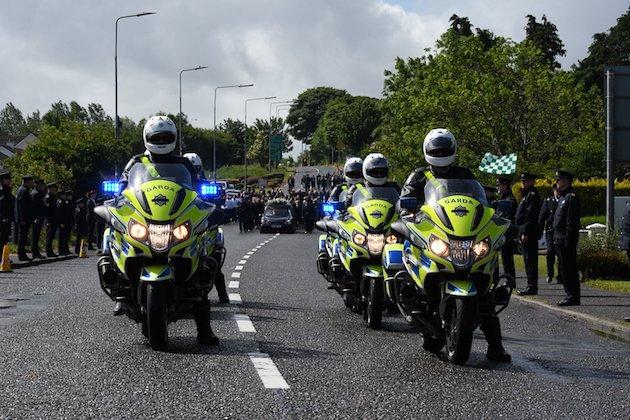 DUBLIN, Ireland - Taoiseach Leo Varadkar on Wednesday paid a further tribute to Det Garda Colm Horkan who was killed on Wednesday night one week ago when he was shot several times while responding to an incident in Castlerea, Co Roscommon. Stephen Silver (43), of Foxford, Co Mayo, has been charged with his murder after being arrested on Friday night.

A minute's silence was held in the Dail on Wednesday where members paid tribute to the fallen Garda officer.

"The remarkable outpouring of grief we saw over the weekend says a lot about our values as a country and the respect we have for the men and women who uphold our laws. Whenever we lose a member of An Garda Sichna in the line of duty it wounds us all and we grieve as a nation," rthe taoiseach said Wednesday.

"At the funeral, Colm's brother Brendan remembered his achievements on the sporting pitch and said, 'He never let the jersey down.'"

"The exact same thing could be said of his career as a Garda. He never let the uniform down. He never let us down, the people he had sworn to serve," Varadkar said.

"Our condolences go to his family and friends, and the people of Charlestown and the members of An Garda Siochana," he added.

The funeral mass for Detective Garda Horkan took place at St. James' Church, Charlestown, Mayo on Sunday followed by a private burial at an adjoining cemetery.

Colm was a talented sportsman and GAA fanatic, he represented Mayo at Under-21. He was part of the Charlestown Sarsfields team that won County and Connacht senior titles in 2001. He also coached GAA.

The State Funeral for Colm was held in the Church of St James in Charlestown, the same church where he was baptised, received his First Communion and made his Confirmation.

The funeral was attended by Commissioner Drew Harris and Minister for Justice & Equality Charles Flanagan TD.

Nearly a thousand people watched the mass on a big screen from the nearby Fr O'Hara Park, while colleagues of Colm from Roscommon/ Longford and Mayo Divisions lined the streets outside the church.

The funeral was also streamed online for personnel and members of the public to say goodbye to Colm.

A minute's silence was observed at 12 noon around the country to remember Colm and the sacrifice he made in protecting the community he served.

The start of the minute's silence was marked by Sergeant Sinead Reilly ringing the Peace Bell in the grounds of ras an Uachtarin in the company of President Michael D Higgins and his wife Sabina Higgins.

Thousands of Garda personnel, retired members of An Garda Sochna, colleagues of other frontline services and the public stood outside Garda Stations or in their homes all over Ireland to pay their respects to Colm.

Colm was the 89th member of An Garda Sochna killed in the line of duty. His death is a stark reminder of the enormous sacrifices that Garda make to keep people safe.