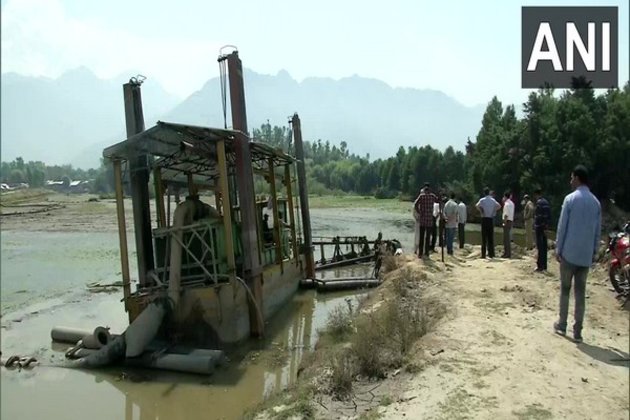 LAWDA Vice-Chairman Tufail Matto said, "This settling basin hasn't been de-silted for around 20 years. This process will take about a year to complete."Matto said about 70-80 per cent of the water that goes into the Dal Lake passes through the Teilbal settling basin. This settling basin was created so that all the sediments in the water could settle down before it entered the lake. "We are carrying out dredging and de-silting so that future generations can have clean water to use," he said.

Local residents said the basin which was once used as a source of drinking water has been filled with silt and garbage because the water body had not been dredged for two decades. They thanked LAWDA for the move.

"This move of LAWDA is appreciated by us. Water from the mountains of Dachigam national park and other areas come into this basin. Earlier we used to drink water from the basin, but it became undrinkable over time as the basin was not cleaned for the past 20 years," Ghulam Rasool, a local resident told ANI.

Another resident Muhammad Rafiq said, "The move will help in beautification of the Dal Lake which is one of the main tourist destinations of the area."The residents said they were partly responsible for not keeping the basin clean. "We used this basin for drinking water in the past, but due to misuse, it got polluted to the extent that we can't even look at it. We pledge to keep it clean in future," said Abdul Rehman, a local resident.

One of the most noteworthy tourist destinations, the Dal Lake attracts a large number of tourists from across the world every year and contributes majorly to the economy of the area. (ANI)