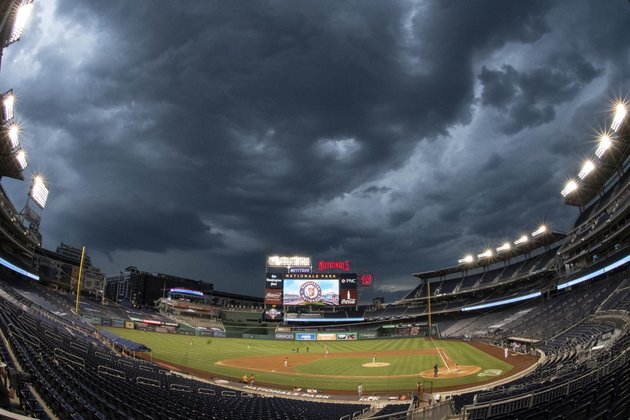 Under the original schedule released for the 2020 season, a matchup between aces Gerrit Cole and Max Scherzer could have only happened at the World Series.

This year is anything but normal and the season will get underway Thursday night after a nearly four-month delay due to the coronavirus pandemic when Cole's Yankees visit Scherzer's Nationals for the first game of a 60-game regular season that will be played in empty stadiums and contain piped-in crowd noise.

"This is 2020 baseball. So, you just have to keep a smile on your face, just embrace it and have fun with it."

In an additional challenge, the weather forecast for Washington, D.C., on Thursday evening calls for scattered to severe thunderstorms, according to The Weather Channel. There is a 90 percent chance of rain Thursday afternoon that drops to 40 percent that night.

Instead, interleague games will be geographically friendly with the Yankees and Nationals facing opponents in the NL and AL East to limit travel.

Cole will make his first appearance under his new $324 million contract after spending the past two seasons with the Houston Astros. He went 20-5 last season, led the American League with a baseball-best 326 strikeouts and won his final 16 regular-season decisions before splitting a pair of World Series starts against Washington.

All three outfielders are healthy now and the only health question for the Yankees is the availability of closer Aroldis Chapman, who tested positive for coronavirus on July 11 and is not expected to be active Thursday. DJ LeMahieu also contracted the virus but returned to the Yankees late last week and is expected to be in the starting lineup.

"It's been a crazy year, affecting a lot of a people, a lot of families," Judge said. "I'm just excited to get back on the field and start playing the game that I love, and hopefully, bring some positivity in this world with a lot of negativity going on."

The Nationals are coming off their first World Series title after starting last season with a 19-31 record. Scherzer was 11-7 with a 2.92 ERA in 27 regular season starts and then pitched five innings apiece in Washington's wins in Game 1 and 7 of the World Series.

Most of Washington's championship team returns except for Anthony Rendon, who signed with the Los Angeles Angels in free agency. As preparations for the season resumed in July, there were questions about budding superstar Juan Soto, but he returned last week after a two-week absence due to undisclosed reasons.

Thursday is the first regular-season matchup between Cole and Scherzer. They opposed each other in the opener of the World Series when Scherzer allowed two runs and Cole allowed five runs over seven innings during Washington's 5-4 win.

Cole is 3-2 with a 2.92 ERA in six regular season starts against Washington with all of those starts occurring when he was with Pittsburgh. Scherzer is 4-3 with a 4.04 ERA in seven career starts against the Yankees.

Both pitchers will take the mound after Dr. Anthony Fauci, the director of the National Institute of Allergy and Infectious Diseases, throws the ceremonial first pitch.