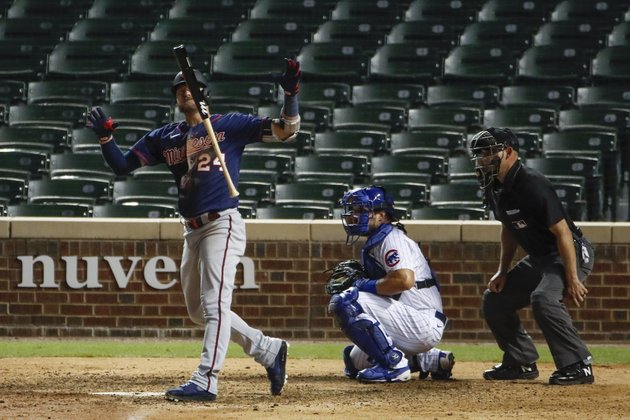 Minnesota scored 51 percent of its franchise-record 939 runs via the long ball in 2019, and then added slugging third baseman Josh Donaldson in the offseason.

While the Twins realize they won't come close to replicating those offensive numbers during a 2020 campaign shortened to 60 games due to the COVID-19 pandemic, the club nonetheless remains confident about its versatility. Beginning with Friday's season opener against the White Sox in Chicago, the Twins know they will need that trait in their bid to repeat as division champs.

"I'm really proud of how well our players have adapted to this unusual year," Minnesota manager Rocco Baldelli said. "We definitely have a mindset of whatever we need to do, we're doing to get it done so we can be successful."

Minnesota earned its first 100-win season since 1965 a year ago behind a 50-26 record within the division. That included a 13-6 mark against the White Sox, whose fusion of offseason veteran additions such as catcher Yasmani Grandal and left-hander Dallas Keuchel with a budding young core featuring reigning AL batting champion Tim Anderson has the team primed to unseat the Twins.

"First and foremost, the goal is just win and win the World Series with this team," Chicago rookie center fielder Luis Robert said through an interpreter. "That's the main goal for everybody on this team. Just try to help this team win. I know if the team does well, I'll be good, too, because I'm going to be part of that success. That's my main focus right now."

The White Sox toted plenty of confidence into spring training, and that hardly waned during the nearly four-month hiatus prompted by the pandemic.

"Going on YouTube and watching various intrasquad games from around the league, watching our team throughout this summer camp, I feel like the players have done a really good job of preparing themselves for a season," Giolito said. "It seems like everyone's prepared, everyone's excited, so I think it's going to be really high-quality baseball coming over the next few months."

Minnesota will be hobbled at the start, as All-Star right-hander Jake Odorizzi, the team's projected No. 2 starter, was placed on the injured list with upper-back soreness to begin the season. Center fielder Byron Buxton is on the active roster but may be limited as he recovers from a sprained left foot he suffered late in summer camp.

Still, a resilient lineup is ready to go.

"I wouldn't put anything past our hitters," Baldelli said. "We've seen them turn it on very, very quickly in the past."