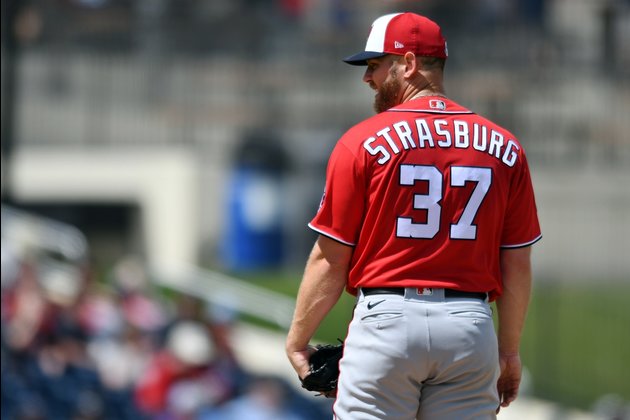 In his last appearance, Stephen Strasburg pitched 8 1/3 dominant innings in Game 6 of the World Series to help the Washington Nationals stave off elimination and ultimately beat the Houston Astros for their first championship.

At the time, it was potentially his final start with Washington. The right-hander opted out of a seven-year extension signed in 2016, but landed a seven-year $245 million deal from the team in free agency. He will take the hill Saturday night when the Nationals host the New York Yankees in the second game of a three-game series.

Strasburg went 18-6 with a 3.32 ERA last season and then won five postseason games, including two in the World Series to earn MVP honors. He spent the coronavirus shutdown in the Washington, D.C, area.

"I did my best to stay ready," Strasburg said during Nationals summer camp on July 10. "It's just about getting built up. My arm's feeling good. It's feeling strong. I think it's just a matter of getting back the little bit of extra extension in your delivery that it's kind of hard to simulate when I was pretty much throwing into a net."

Strasburg made his final preparations for the abbreviated season Monday in Baltimore when he allowed one run on six hits and threw 81 pitches in five innings.

"I think come his first start, his velo will probably get a little better, but I really liked what I saw," Washington manager Dave Martinez said.

Strasburg, who set career highs in wins, innings pitched (209) and strikeouts (251) last season, will take the mound after Washington began its title defense with a rain-shortened 4-1 loss on Thursday. Max Scherzer struck out 11 before the game was halted in the sixth but also allowed a two-run homer to Giancarlo Stanton.

The season-opening loss occurred after the Nationals announced star outfielder Juan Soto had tested positive for coronavirus. General manager Mike Rizzo said Soto was asymptomatic but will miss at least the rest of the series with the Yankees.

Strasburg, who turned 32 on Wednesday, has never faced the Yankees but has faced Stanton and DJ LeMahieu before. LeMahieu, who was held out of the opener after missing time in summer camp recovering from COVID-19, is 6-for-21 off Strasburg while Stanton is 15-for-48 (.313) with three homers and 11 RBIs.

Stanton drove in three runs Thursday after injuries limited him to 59 at-bats in 18 games last season. He also missed the first spring training due to a calf injury.

"It's about as good as you can draw it up starting the game out that way," Yankees manager Aaron Boone said. "For G to go up there and clear it out, that's a huge shot in the arm when you're facing the other team's ace and you have your ace in the mound."

Stanton, Aaron Judge and Aaron Hicks would not have been ready for the originally scheduled season opener on March 26 and neither would James Paxton, who starts Saturday.

Paxton was recovering from a back injury when the sport was shut down but is fully recovered. He made his final appearance in summer camp by throwing 84 pitches in five simulated innings on Monday.

"Still looking for the last few ticks, trying to get that really comfortable feeling out there with my rhythm and everything," Paxton said. "I'm working towards it. I feel like I'm ready to go for the 25th."

Paxton is facing Washington for the first time.