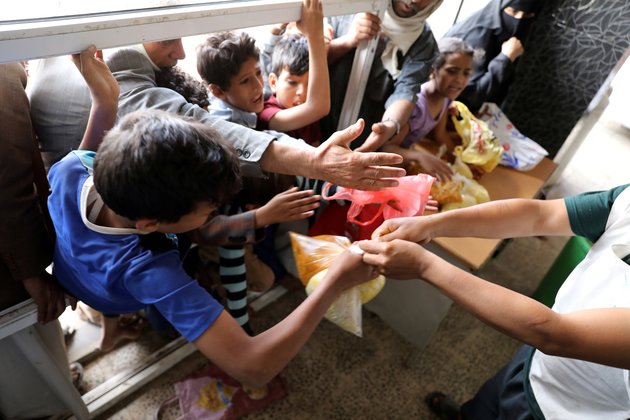 NEW YORK - The United Nations warned Tuesday that its humanitarian operation in Yemen is vastly underfunded and "on the verge of collapse," as COVID-19 ramps up and millions of people face extreme hunger in a matter of weeks.

"Without more funding, we should all expect large increases in hunger, malnutrition, cholera, COVID-19 - and, above all, death," humanitarian chief Mark Lowcock told a meeting of the U.N. Security Council. "We should expect many more people to die."

The U.N. says war-torn Yemen is the world's worst humanitarian crisis and $3.2 billion is required for the response this year. At a pledge conference in June, donors promised only $1.35 billion of the $2.4 billion required for the most essential needs until the end of the year, leaving more than a billion dollar shortfall. This week, Lowcock injected $35 million from a U.N. emergency fund into the effort, but overall the world body received only $558 million from donors by late June, forcing it to make difficult choices.

Lowcock said the organization has already had to implement cuts to many essential services, including halving rations to eight million of the 13 million Yemenis it feeds each month. He said similar cuts are affecting millions of people who rely on aid organizations for clean water, health care and other needs.

Further cuts are planned for August and September if the cash crisis continues, including halving water and sanitation programs in 15 cities - critical elements in fighting the growing COVID-19 outbreak.

"In September, nearly 400 health facilities - including 189 hospitals - will lose supplies of clean water and essential medicines," he said. "That could cut off health care for 9 million people."

U.S.-based Johns Hopkins University, which records global infections from the new coronavirus, has reported nearly 1,700 confirmed cases in Yemen and 483 deaths. Experts agree that the numbers are vastly underreported due to the situation on the ground.

"In September, we will run out of money to treat more than a quarter of a million children who are suffering from severe malnutrition," Lowcock said Tuesday. "Without treatment, those children will die."

The U.N. humanitarian chief said an assessment of food security carried out in 133 government-controlled areas found 16 districts were at Phase 4 food insecurity - which is one step away from famine. The results of a survey of Houthi rebel-controlled areas is expected in the coming weeks and is likely to also be bleak, as food aid was previously reduced in some rebel areas due to funding cuts.

Saudi Arabia, which is one of the conflict's main protagonists, gave the U.N. $750 million last year towards its humanitarian appeal, but a promise of $500 million this year has not yet materialized.

"The sharp drop in pledges and payments from Gulf countries this year is the main reason the resource gap remains so large," Lowcock told council members.

Yemen is also facing economic collapse, as its currency has plunged, remittances have dried up and civil servants have not been paid in years. These factors have added to the inability of most Yemenis to buy food and other critical items.

More than five years of conflict between the Saudi-backed government and Iranian-supported Houthi rebels have deepened Yemen's poverty, devastated its infrastructure and caused widespread hunger and suffering.