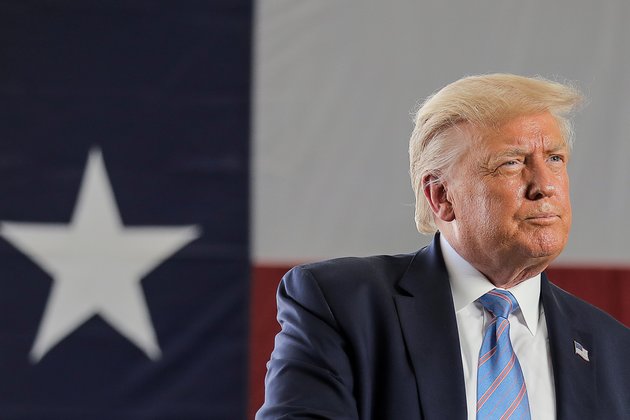 Trump, on Twitter on Thursday morning, alleged, without evidence, that mail-in balloting would be make the 2020 presidential balloting the "most INACCURATE & FRAUDULENT Election in history."

The president added: "It will be a great embarrassment to the USA. Delay the Election until people can properly, securely and safely vote???

The president does not have the power to delay the election, (the Tuesday after the first Monday in November in every fourth year), which is to be held November 3rd, 2020. The date is set by Congress under the Constitution.

During a hearing on Capitol Hill, Secretary of State Mike Pompeo was asked by Sen. Tim Kaine of Virginia about Trump's tweet.

Pompeo, who is fourth in the line of succession to the presidency, said that he did not want to make a legal judgment on the fly about whether it is possible to delay the election, but "in the end, the Department of Justice and others will make that legal determination."

"There will be no delay" for this year's presidential election, tweeted Congressman Rodney Davis of Illinois.

"Congress sets the election date, and it should not be changed. It will be held on November 3rd, as planned and required by law," added Davis, who is the ranking Republican on the House Administration Committee, which has jurisdiction over the presidential election.

The Republican House Minority leader Kevin McCarthy said the election should go forward despite any concerns by Trump.

"I understand the president's concern about mail-in voting which is different from absentee voting. But never in the history of the Federal elections have we not held an election and we should go forward," McCarthy told reporters Thursday.

This is not an idea anyone, especially the president, should float, said Ari Fleischer, who was a White House press secretary in the administration of President George W. Bush, a Republican.

"I would quickly delete this tweet," if he were president, Fleischer said.

Democratic Sen. Tom Udall of New Mexico said the fact that the president "is even suggesting it is a serious, chilling attack on the democratic process. All members of Congress - and the administration- should speak out."

"No, Mr. President. No. You don't have the power to move the election. Nor should it be moved," tweeted Federal Election Commissioner Ellen Weintraub, a Democratic appointee. "States and localities are asking you and Congress for funds so they can properly run the safe and secure elections all Americans want. Why don't you work on that?"

"This is America. We are a democracy, not a dictatorship," said Dale Ho, director of the voting rights project of the American Civil Liberties Union. "The Constitution sets the date for the election in November. Nothing President Trump says, does, or tweets can change that fact."

"Never in American history-not even during the Civil War and World War II--has there been a successful move to 'Delay the Election' for President," said Beschloss, the author of ten books about American history.

"It's a desperate attempt to distract attention from the worsening COVID-19 crisis and an imploding economy," said presidential historian David Cohen, a political science professor at the University of Akron.

"Trump has attempted to destroy confidence in American institutions and norms from the very beginning, even right after the 2016 election - an election he won - by claiming falsely that millions of people voted illegally He knows he may well lose in 2020 but is trying to get his supporters not to believe the results. It's right out of George Orwell's "1984": 'The party told you to reject the evidence of your eyes and ears,'" Cohen told VOA.

Biden previously suggested Trump will try to delay the election.

"Mark my words - I think he is going to try to kick back the election somehow, come up with some rationale why it can't be held," Biden said at a virtual fundraiser on April 24.

A spokesman for the Trump reelection campaign, Hogan Gidley, explained that the president "is just raising a question about the chaos Democrats have created with their insistence on all mail-in voting. They are using coronavirus as their means to try to institute universal mail-in voting, which means sending every registered voter a ballot whether they asked for one or not."

In a statement to VOA, Gidley added that "voter rolls are notoriously full of bad addresses for people who have moved, are non-citizens, or are even deceased. Universal mail-in voting invites chaos and severe delays in results, as proven by the New York congressional primary, where we still don't know who won after more than a month."

The director of the U.S. Cybersecurity and Infrastructure Security Agency, Chris Krebs, told the Brookings Institution on July 17th, "I've said it before, and I'll say it again. The 2020 election will be the most secure election in modern history."

US Officials Promising 'Most Secure Election in Modern History' The officials say while the November presidential election will not be risk free, defense and back-up systems should guarantee a free and fair result

Krebs said that said at least 92% of U.S. states now have systems in place to ensure there is a paper record of every vote cast, making it easier to audit election results to make sure no one is able to tamper with the tally. And that number could rise as a growing number of states are expected to turn to mail-in ballots instead of in-person voting because of the ongoing coronavirus pandemic.