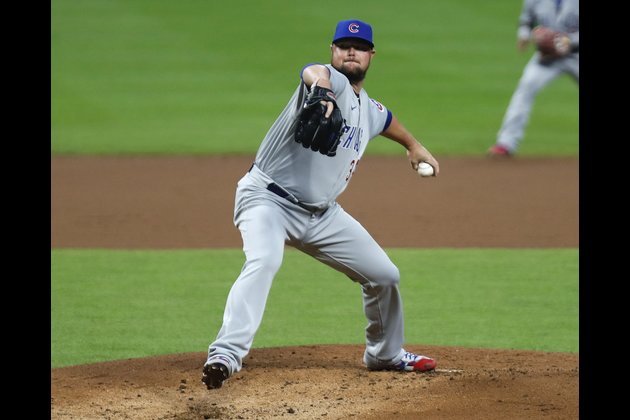 The Milwaukee Brewers will go for their first three-game winning streak of the season when they wrap up a four-game series at the Chicago Cubs on Sunday afternoon.

The Brewers have posted back-to-back wins over their division rival Cubs after losing the series opener. Milwaukee has climbed withina game of .500 following a turbulent start to the shortened season.

"They just, they always compete," Cubs first baseman Anthony Rizzo said. "They're a really good team. They're a good team now, and the best player on the planet (Christian Yelich) is going through a little bit of a grind."

Yelich is hitting .176 through his first 18 games, but he has contributed five homers and 12 RBIs at the plate. The 2018 National League Most Valuable Player has hit .326 and .329 in the past two seasons, respectively, and is coming off a monster campaign in which he hit 44 homers with 97 RBIs.

Another challenge awaits for Yelich and his teammates as they look to finish off a series victory. They will face Cubs left-hander Jon Lester (2-0, 1.06 ERA), who will look to remain unbeaten in his fourth start of the season.

The 36-year-old Lester has bounced back from a difficult 2019 season in which he posted a 4.46 ERA in 31 starts. He has not allowed more than one run in any of his first three starts against the Cincinnati Reds, Pittsburgh Pirates and Cleveland Indians.

Cubs first-year manager David Ross is not surprised by Lester's early-season success. He has known the pitcher for many years, and the duo won World Series titles with the Boston Red Sox in 2013 and the Cubs in 2016.

"He's the ultimate competitor," Ross said. "He's going to figure out a way to win, to beat you, and he's going to give it everything he's got. There's never a question or a doubt with the work he puts in, the focus he has, the preparation."

The Brewers will counter with right-hander Josh Lindblom (1-0, 5.68), who also will make his fourth start of the season. He will look to bounce back from a difficult outing in which he gave up four runs on seven hits in four innings against the Minnesota Twins.

The 33-year-old Lindblom has faced the Cubs twice in his career, with both of those appearances coming out of the bullpen. He has thrown two scoreless innings against the club, walking two and striking out two.

Lindblom pitched in college at Purdue, about 130 miles southeast of Wrigley Field.

This will be the seventh game of the season between the Brewers and Cubs. The teams are 3-3 in the first six contests with the Cubs holding a 27-21 edge in runs scored.