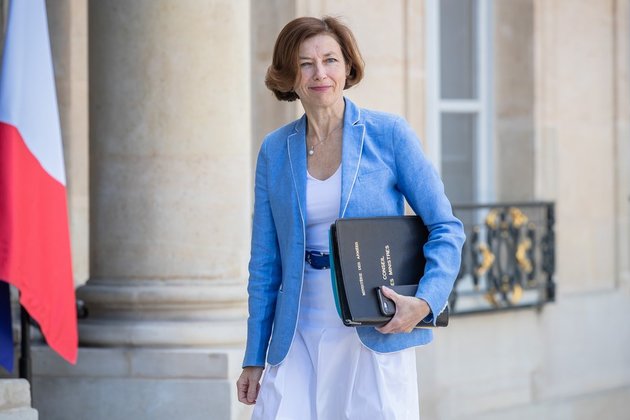 French Minister of the Armed Forces Florence Parly arrives for the minister council at the Presidential Elysee Palace in Paris, France, 7 July, 2020. (Photo by Aurelien Morissard/Xinhua)

"The Barkhane Operation, asked for by the Mali population and authorized by the UN Security Council, continues," said Minister for the Armed Forces Florence Parly.

PARIS, Aug. 20 (Xinhua) -- The military operation by the French forces continues in Mali, Minister for the Armed Forces Florence Parly said on Thursday, two days after a mutiny led to the forced resignation of President Ibrahim Boubacar Keita of the western African country.

"The Barkhane Operation, asked for by the Mali population and authorized by the UN Security Council, continues," said Parly on Twitter.

Some 5,000 French troops started Barkhane Operation in 2014 in Sahel to help G5 Sahel countries (Burkina Faso, Chad, Mali, Mauritania and Niger) maintain control of their territory while also preventing the region from becoming a safe haven for Islamist groups.

On Tuesday night, a mutiny, which happened in Kati, a town near the capital Bamako, led to the arrest of Malian president, prime minister and several other members of government. Keita, detained by mutinous Malian soldiers in a military camp, announced his resignation and the dissolution of the National Assembly and Prime Minister Boubou Cisse's government.

France "reaffirms its attachment to sovereignty, respect of institutions, democratic life and stability in Mali. It encourages all political and social forces to engage a dialogue to find a solution to the deep crisis the country is going through and calls for the immediate re-establishment of civil power," said Minister of Foreign Affairs Jean-Yves le Drian.

He added that Paris had taken note of Keita's resignation, urging his "immediate release" as well as members of his government who are currently detained.

The United Nations Security Council strongly condemned the mutiny in Mali. The African Union Commission decided to suspend Mali from the pan-African body.

Leaders of the military coup said Wednesday they would enact a political transition and stage elections within a "reasonable time." ■