Jazz looking to close out Murray, Nuggets in Game 6 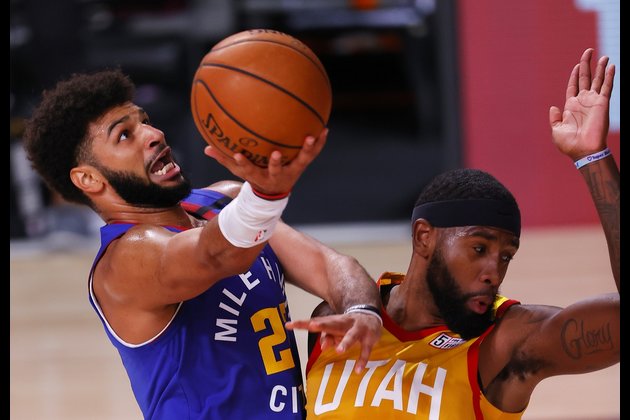 Pushed to the brink of elimination, the Denver Nuggets used star power to extend their postseason life for another game.

Denver stayed alive in its Western Conference first-round series against the Utah Jazz thanks to dominant efforts by Jamal Murray and Nikola Jokic in Game 5 on Tuesday. The Nuggets rallied from a 15-point deficit in the third quarter to win, 117-107.

The Jazz still lead the series 3-2 heading into Game 6 on Thursday at the ESPN Wide World of Sports Complex near Orlando.

Murray and Jokic took turns dominating Game 5. Jokic gave Denver the early lift, scoring 21 points on a perfect 8-of-8 shooting in the first quarter. Then, Murray took over after halftime. He poured out 33 of his game-high 42 points over the final two quarters. Over the final 24 minutes, the Denver guard made 14 of 18 shots from the floor.

"Jamal embraces a moment, he's not afraid of it," Nuggets coach Michael Malone said. "Some people run away from those moments; he looks for them."

Murray has been consistently dangerous on offense throughout the series. He is averaging 30.8 points per game on 55.7 percent shooting. His ability to make plays all over the floor was evidenced by a near triple-double, as he finished with eight rebounds and eight assists.

Murray credited Jokic's first quarter outburst for opening up the Jazz defense and allowing him to go to work after halftime.

"We needed that boost (and) he gave it to us," Murray said. "He's capable of doing that every night."

Utah will need a similar boost from someone not named Donovan Mitchell if the Jazz hope to avoid extending the series to a Game 7.

Mitchell has been excellent throughout the series. He is scoring 37.6 points per contest, shooting 54.5 percent from the floor and averaging 5.6 assists. But the Jazz have been at their best when Mitchell hasn't had to shoulder the burden of shot creation alone.

Consistent help did not arrive in Game 5. Rudy Gobert struggled to contain Jokic in crucial stretches. Mike Conley and Jordan Clarkson finished with 17 points apiece, but they faded on offense late when the Nuggets made their rally behind Murray.

Utah's role players were of little help on offense. Royce O'Neale passed up taking open 3-pointers at critical times and Tony Bradley bungled multiple possessions where he had an open layup or dunk.

"We've got to be professionals about it, understand we take this lump and move on," Mitchell said. "You've got to give them credit where credit's due. They raised their level and we just didn't match it."

Jazz coach Quin Snyder thought his team lost a little composure after getting a comfortable lead. Once Denver started making a run, they looked for favorable whistles instead of focusing on defense.

"I thought we were looking for a call at various times instead of going a little stronger to the basket," Snyder said. "And more than anything, mentally we weren't able to get to the next play and as a result they started to get on a run."