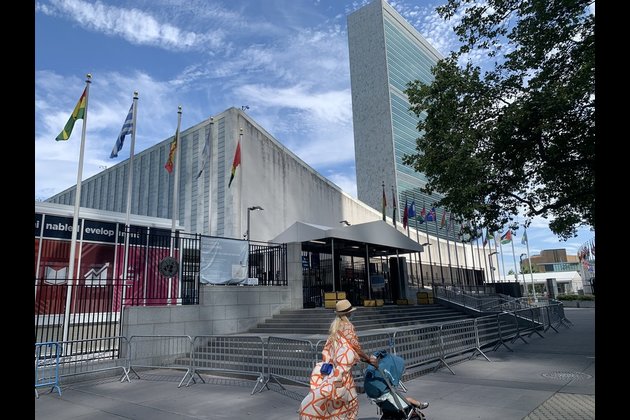 A woman walks with a baby stroller in front of the United Nations (UN) headquarters in New York, the United States, July 20, 2020. (Xinhua/Wang Jiangang)

China vows to continue to earnestly fulfill the due fiscal obligations to the UN as a developing country.

BEIJING, Sept. 4 (Xinhua) -- China on Friday expressed its concern for the possible impact of a huge shortfall in contributed assessments on the United Nations' normal work, vowing to continue fulfilling its due fiscal obligations to the UN as a developing country.

In a letter addressed to member states, UN Secretary-General Antonio Guterres said the organization is faced with severe financial difficulties, with overdue contributions amounting to 1.52 billion U.S. dollars. He called on member states to pay their assessed contributions on time and in full to support the UN in accomplishing its work this year.

Responding to a query about the remarks, Foreign Ministry spokesperson Hua Chunying said China, as the second-largest contributor to the UN, has been fully implementing its fiscal obligations to the organization and paid this year's contribution in full, showing its support for the UN through concrete actions.

"We will continue to earnestly fulfill the due fiscal obligations to the UN as a developing country," the spokesperson said at a daily press briefing.

"China pays high attention to the current financial distress the UN is experiencing, and expresses concerns for the possible impact of the huge shortfall in assessed contributions on the UN's normal operations," said Hua.

Hua pointed out that the United States, as the No.1 country in terms of defaulting on membership fees to the UN, has long been delaying payment, with the amount overdue accounting for more than two thirds of the total, which is the main reason that has led to the UN's financial difficulties.

This year marks the 75th anniversary of the UN's founding. Hua said that upholding multilateralism, safeguarding the UN's core role in international affairs, and jointly responding to global challenges through united cooperation conform with the common interests of all parties.

"China is ready to work with all countries to actively support the UN's work and jointly advance the UN's bigger role in promoting world peace and development," Hua added. ■