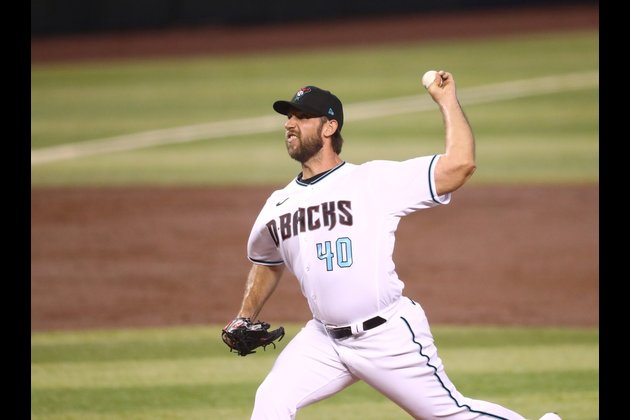 The Arizona Diamondbacks hope to build on just their second win in the past 15 games on Saturday, with a star pitcher returning from injury to face the team with which he won three World Series titles.

It so happens that Madison Bumgarner's first start since Aug. 9 is scheduled to be against theteam with which he became a star, the San Francisco Giants. Bumgarner is set to be activated from the 10-day injured list in time to take the mound at Oracle Park for the first time since last season, after which he signed with Arizona.

It's been a bumpy start to Bumgarner's Diamondbacks career. The big left-hander and four-time All-Star is 0-3 with a 9.35 earned run average and landed on the injured list with a mid-back strain.

Bumgarner, 31, said he has enjoyed seeing some familiar faces.

"I'm a pretty easygoing guy," Bumgarner said. "Guys have been asking me if it's weird coming in on the other side. It's really not. But it's nice to be back and see a lot of the guys that I knew and played with and worked with, the staff over there. I was excited to come back here and see the city."

Beyond that, Bumgarner added, it's just a regular road trip for him.

"I'm anticipating and planning on it just being another start for me," he added.

The Giants (18-24), who are trying to keep pace in the race for a postseason berth in the National League, will turn to Trevor Cahill as Saturday's starter against Bumgarner. Cahill (0-0, 2.51 ERA) is apparently fine after leaving his most recent start in the fourth inning with left hip discomfort.

Cahill, 32, said afterward it's something he's dealt with in the past. This will be his third straight start against Arizona (15-24), where he pitched from 2012-14.

The Giants are looking to rebound from a 6-5 loss to the Diamondbacks on Friday night. The Giants had their chance to take a lead, loading the bases with no outs in the eighth inning and down only a run. But a baserunning mistake by Mauricio Dubon, who was caught off second base after a flyout to right field for a double play, hurt the Giants.

"My mistake was I ran with my head down. I put my head down and tried to go to third. That can't happen," Dubon said. "I cost (us) the game."

Manager Gabe Kapler said Dubon has played well and just made a mistake.

"He takes plays like that harder than anybody," Kapler said. "I did sit down and have a talk with him, more than anything else just to reassure him that we believe in him. He's been playing great defense. That's just a play that he'd just like to have back.

"It's been addressed but it really doesn't need to be addressed, he's a smart baseball player."

First baseman Brandon Belt continues to be on a tear at the plate. With two hits including a home run Friday, he's batting .500 -- 26 of 52 --since Aug. 16. Belt has 13 runs, eight doubles, one triple, five home runs and 13 runs batted in over that stretch.

"It looks like he's going to hit a home run every time," Dubon said of Belt. "He knows how to be successful."