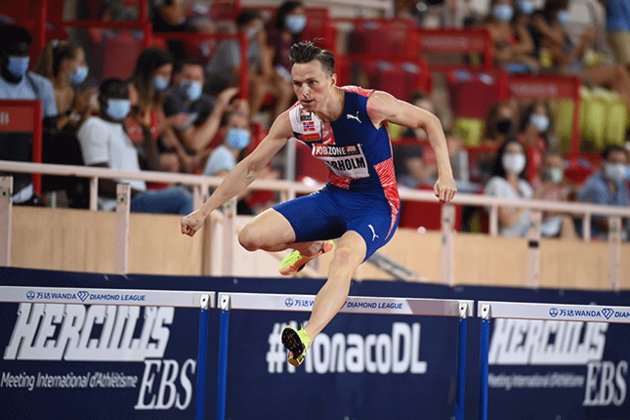 On 23 August, the 24-year-old Norwegian ran 46.87 seconds at the Diamond League in Stockholm, setting a new European record.

It was the second fastest time in history after Kevin Young's 46.78 seconds from the Barcelona Olympics in 1992.

Warholm was a late addition to the start list for the Golden Spike meeting in the eastern Czech steel hub of Ostrava as the organisers only confirmed his name last Wednesday.

"We are very serious about the Covid-19 precautions, so that has been an important issue," said Warholm.

"It has been exactly two years since I was there last time for the Continental Cup, but at the Golden Spike I will run for the first time. I look forward to seeing you all again," he added.

After landing in Ostrava on Sunday afternoon, Warholm hailed his form.

"Everything is working so far, we had a great flight," he said.

"The weather is also improving. I will try to improve my best again. I heard that there will also be spectators and that makes me even happier."

Forecasters predict a sunny Tuesday for the event which was postponed from May because of the coronavirus pandemic.

The event will be open for up to 5 000 fans amid the coronavirus measures, divided into ten sectors with a maximum of 500 fans in each.

Men's shot put will feature Ryan Crouser, who leads this year's rankings with 22.91 metres from July and who won a meeting in Chorzow, Poland on Sunday with 22.70 metres.