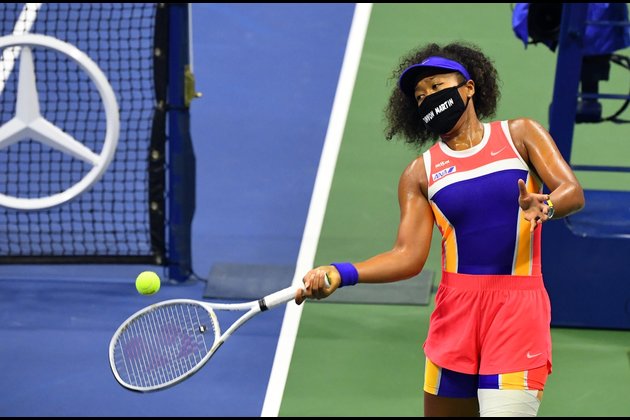 Kontaveit couldn't muster a break-point opportunity against Osaka, who won 84 percent of points on her first serve. Osaka broke Kontaveit's serve twice and dominated at the net, converting 67 percent of her chances.

Osaka will face unseeded Shelby Rogers on Tuesday in the quarterfinals. Rogers ousted sixth seed Petra Kvitova 7-6 (5), 3-6, 7-6 (6) in a match that lasted 2 hours, 43 minutes. Rogers, a 27-year-old from South Carolina, hasn't advanced past the third round at the U.S. Open and has just one Grand Slam quarterfinal to her credit -- the 2016 French Open, which she lost 7-5, 6-3 to Garbine Muguruza of Spain.

Rogers fought off four match points on her way to the win and said she was particularly proud of the way she battled.

Kvitova lost three service points in the tie-breaker - including a double fault at match point -- and failed to capitalize on three match points with Rogers serving down 4-5 in the third set.

"She was playing unbelievable, especially on these courts," Rogers said of her opponent. "She hit so many aces and winners today, I knew it was going to be really tough. There were a lot of emotions out there for both of us, but that's the beauty of tennis. I'm so, so happy to get through this one."

Rogers is joined in the quarterfinals by Jennifer Brady, a 25-year-old Pennsylvania native who defeated Angelique Kerber 6-1, 6-4 on Sunday. Brady breezed past the German, a three-time Grand Slam winner, in 23 minutes in the first set but needed an hour to win the second set.

Pain in her leg forced Brady to take a medical timeout during the set.

Kerber, the 17th seed, was impressed with Brady's play.

"She's hitting the ball really fast," Kerber said. "She's playing well. She has confidence. Let's see how far she can get here, but for sure she can get far."

Brady next will meet Yulia Putintseva of Kazakhstan, who eliminated another top 10 seed in Petra Martic of Croatia.

Of the eight remaining women in the field, four are Americans: Rogers, Brady, Serena Williams and Sofia Kenin.