Rockets hope to get Westbrook untracked in Game 3 vs. Lakers 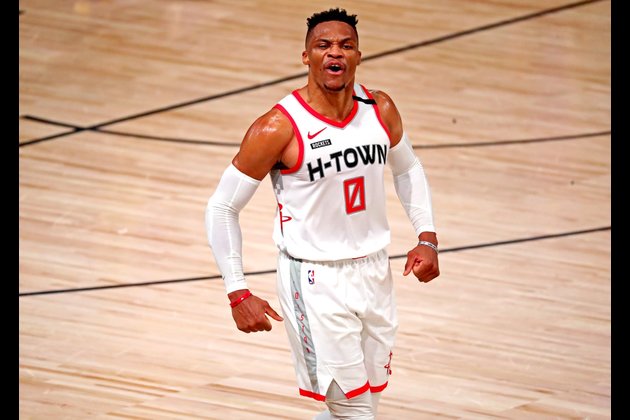 Since his return from a strained right quad that cost him the opening four games of these playoffs, Westbrook has yet to approach thesterling form that dovetailed with the Rockets' commitment to a small-ball lineup. And in Game 2 of the Western Conference semifinals against the Los Angeles Lakers on Sunday, Westbrook posted his second seven-turnover performance since he resumed play in the backcourt.

"Right now I'm just running around," Westbrook said following the Rockets' 117-109 loss to the Lakers. "I've got to look at film and figure out how to be effective."

Westbrook and the Rockets won't have long to make a course correction. With the series tied at a game apiece, Houston and the Lakers will square off in Game 3 in AdventHealth Arena at the ESPN Wide World of Sports Complex near Orlando on Tuesday.

In the 11 games that followed the trade that shipped center Clint Capela to Atlanta, landed forward Robert Covington from Minnesota and reshaped the Houston roster, Westbrook averaged 31.7 points, 8.2 rebounds and 5.5 assists with a .546/.385/.726 shooting line. Then a global pandemic shut the NBA season down for four-plus months, and upon resumption of play in the bubble, Westbrook took a modest step back relative to overall production and efficiency.

"He's still working his way back and he'll play with a great intensity," D'Antoni said. "He'll always be aggressive. He needs to be aggressive, that's why he's Russell Westbrook and that's fine. He'll work it out.

"We're not going to win anything without Russell so that's not even a question or whatever. He's going to work through it and he's fine. He's more upset than anybody. He's a great, great player and you know he'll be fine. I'm not worried about him."

Instead of attacking the basket with fury in Game 2, Westbrook settled for perimeter jumpers that are antithetical to his aggressive nature. Westbrook missed 6 of 7 3-pointers with the Lakers baiting him into shots that were errant and reflective of his wavering confidence.

Westbrook is vital to the Rockets' championship aspirations. They need him to recover quickly.

"Russ will be fine," Harden said. "He's great. And the great thing about Russ is he does more to affect the game than just score the basketball. He's so athletic ... he can affect it with his defense, he can be a playmaker. He does a variety of things to impact the game of basketball for our team, so we're not worried about him."

The Lakers rebounded from a 15-point loss in the series opener by re-establishing their identity, posting advantages over Houston on the glass (41-35), in transition points (20-6) and via points in the paint (54-26). The Lakers finished in a tie for rebounding and at a deficit in paint points in Game 1.

Additionally, the Lakers did a much better job of unlocking All-Star forward Anthony Davis, their greatest matchup advantage. Davis recorded a game-high 34 points to go with 10 rebounds, four assists and a blocked shot, and served as the force the Lakers sorely needed on both ends of the court.

"He was terrific," Lakers coach Frank Vogel said. "Obviously trying to go quicker before double teams; we try to get the ball to him more on the move and that allowed him to catch and go. He got going a little bit.

"And then defensively, he has the ability for us to stay home. We don't have to double as much when he's matched up with some of those guys on the perimeter. It's just a great two-way performance."

Star forward LeBron James is averaging 24 points in the series. He had 28 points, 11 rebounds and nine assists in Game 2 after having a line of 20-8-7 in the opener.