No. 7 Notre Dame seeks first win ever vs. So. Florida 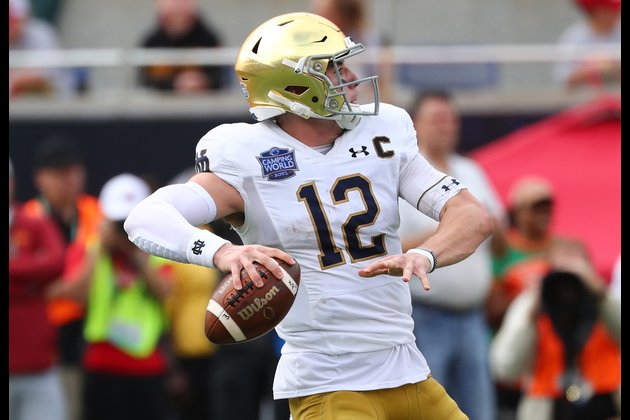 A 2020 season rife with unprecedented moments adds another on Saturday when No. 7-ranked Notre Dame hosts South Florida in South Bend, Ind.

For the Fighting Irish (1-0), Saturday marks their sole non-conference game of the 2020 slate. That on its own is historic, as the longtime independent NotreDame program is playing this season as a member of the Atlantic Coast Conference.

The Irish won their ACC debut against Duke on Saturday, 27-13, for the 909th victory in their history. Despite ranking among the winningest programs of all time, however, they have never beaten USF.

The Bulls (1-0) won the only previous meeting between the two, 23-20, on Sept. 3, 2011 in the rain-soaked season opener of Notre Dame coach Brian Kelly's second season at the helm.

Kelly remains at Notre Dame in 2020, but USF has undergone multiple facelifts in the last nine years. The most recent was the hire of Jeff Scott to replace Charlie Strong, who was fired after a 4-8 finish in 2019.

USF's 27-6 win in Scott's debut last week against The Citadel included a 0-yard punt-return touchdown when Omarion Dollison caught a botched kick in the end zone. The special-teams score gave the Bulls some breathing room before halftime after having mustered only a Jordan McCloud touchdown pass to DeVontres Dukes on their first three possessions.

McCloud was one of three quarterbacks to play in the opener, which Scott said he expects to continue doing until the start of American Athletic Conference play.

The Bulls offense added two touchdown runs, one each from Kelley Joiner and Noah Johnson, to cap a 302-yard rushing game.

The Bulls' success on the ground came in spite of a heavily depleted offensive line.

"Up until last week, we really felt like we were going to have four returning starters on the offensive line," Scott said Monday on his weekly radio show. "After some things had happened, we ended up going into the game with four new starters. That was definitely a challenge."

Scott added that "with COVID, you need as many linemen as you can possibly have."

Kelly praised the USF front five as "big and physical," despite the absences, which include Brad Cecil and Demetris Harris. Both are questionable for Saturday's contest.

"We expect those guys are going to be back, and if they are, they're going to be one of the bigger offensive lines we face this year," Kelly said.

For its part, the Notre Dame defense is coming off an outstanding showing against the run in its season opener. The Irish held Duke to just 73 yards on 30 carries. Defensive linemen Jeremiah Owusu-Koramoah and Kurt Hinish helped set the tone, each recording two tackles for loss and a sack.

"We're only one week in, but we're tied for No. 1 in the country at plus-three in turnovers," Scott said. "That's where we want to be."

Generating turnovers proved historically successful for USF: The Bulls forced five and gave away none in their win at Notre Dame nine years ago.

The Irish committed one turnover against Duke, an Ian Book interception. That was a minor blemish on an afternoon in which Kyren Williams dazzled with 112 rushing yards and two touchdowns, plus another 93 yards on two receptions.