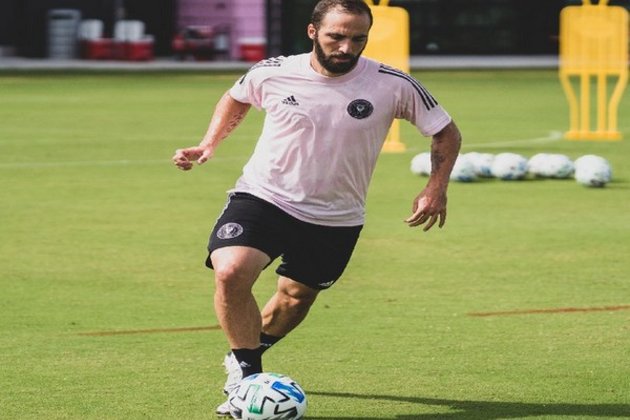 The forward player has been a three-time LaLiga and Serie A winner. The Argentine forward joins Inter Miami after leading Juventus FC to the 2019-20 Serie A title. "We are pleased to close a deal with Gonzalo and add an experienced and successful goalscorer, who has excelled in the world's best teams and leagues," said Paul McDonough, Inter Miami CF's COOSporting Director.

The number nine will occupy an international roster slot, pending receipt of his International Transfer Certificate (ITC) and P-1 Visa, and completion of any mandatory quarantine period under local government and MLS health and safety protocol.

"First of all, I want to thank Inter Miami for the effort it has made to sign me. I think it will be a beautiful experience in my life. It's what I was looking for - a new experience, a new league, and a beautiful city. I'm really happy to be here and that it's official. My goal is to try to transmit all the experience I acquired in Europe and to help the team grow," said Higuain.

The striker joins Inter Miami after accumulating a track record of success at both the club and international levels. He has won numerous titles, including his three LaLiga and three Serie A titles, as well as one Copa del Rey, two Supercopa de Espana, three Coppa Italia, one Supercoppa Italiana, and one UEFA Europa League titles.Higuain has been named to the Serie A Team of the Year three times, UEFA Europa League Squad of the Season twice, and Juventus Player of the Year twice. He also holds the record for most goals scored in a single Serie A season with 36.On the international stage, Higuain has starred for the Argentinian national team. The forward has made 75 appearances and scored 31 goals across all competitions, the fifth-most of any player in the country's history and third-most among active players.

He has appeared in matches at three editions of the FIFA World Cup, including the 2014 run in which he played every match en route to the final. He started six of the seven matches in the 2014 World Cup in which Argentina finished as runners-up, including the final against Germany. He also appeared in three Copa America tournaments, including two in which Argentina finished as runners-up.Higuain will join former Juventus teammate Blaise Matuidi at Inter Miami, making the Club the only team in MLS featuring two active FIFA World Cup finalists. The pair featured as teammates 76 times for Juventus, with Higuain totaling 25 goals and nine assists in the process.The forward had begun his career in his native Argentina with Club Atletico River Plate prior to joining Real Madrid. He made his professional debut for Los Millonarios in May 2005 and went on to score 15 goals for the team in 33 appearances across three seasons. (ANI)