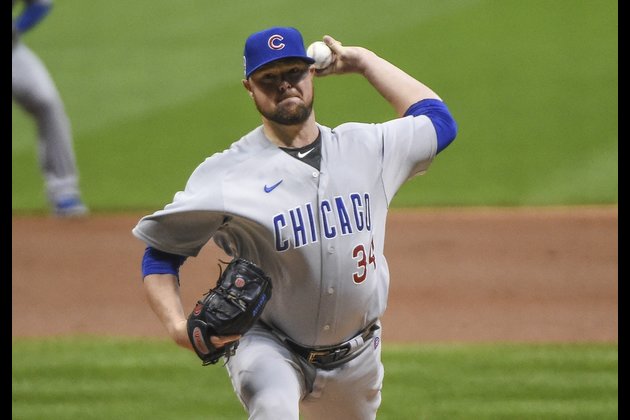 The Pittsburgh Pirates could face veteran left-hander Jon Lester in a Cubs uniform for the last time Monday when Chicago opens a four-game series at PNC Park.

This year hasn't been stellar for Lester (2-2, 4.91 ERA), but it was clear Wednesday how much his time with Chicago has meant. He made what might have been his final start at Wrigley Field if the Cubs let him hit free agency again.

"This year hasn't been easy for a lot of reasons," Lester said during an emotional interview before that game, when he gave up four hits and two runs in five innings in a no-decision against the Cleveland Indians. "I didn't think six years would go this fast."

Cubs general manager Jed Hoyer said Sunday the team isn't ruling out re-signing Lester but is putting off any decisions until after the season.

That would seem to make sense considering Chicago (31-22) appears to be earmarked for the playoffs despite losing two straight. The Cubs lead the National League Central.

But Hoyer is far from dismissive about the Lester situation.

"He's the biggest and best and most impactful free-agent signing in club history," Hoyer told 670 The Score. "His influence and his impact on this organization is sort of beyond reproach. It's very rare that you set a plan and it works out almost exactly as you want. But in the case of Jon, what we signed him to do both in the clubhouse and on the mound, I mean you can't deliver more than he did."

Pittsburgh (15-38) has lost four straight and 12 of its past 13. In each of the past two days, the Pirates got six scoreless innings from their starter -- Mitch Keller on no hits Saturday and Joe Musgrove on one hit Sunday -- before St. Louis rallied against the bullpen.

The Cardinals won four games of a five-game series that ended Sunday. In Pittsburgh's win in the first game of the series, Steven Brault pitched a complete game.

"It's frustrating that we got out of it with one win," Pirates manager Derek Shelton said of the series. "In the long term of it, we had three really good starts that we're going to build on. That's a really good sign for our starters moving forward.

"Those are the things that we need to focus on. For us to win games, we're going to have to score runs, and we haven't scored runs. But the pitching side of it, it's really positive."

In the opener against the Cubs, Pittsburgh is expected to give rookie right-hander J.T. Brubaker (1-2, 4.79 ERA) the start against Lester.

Brubaker will make his eighth big league start and 10th appearance. He had a strong outing Wednesday against Cincinnati, giving up one run and five hits in 5 1/3 innings, with four strikeouts and one walk.

In two career appearances, one start, against the Cubs, Brubaker is 1-0 with a 1.13 ERA. The win came in his Sept. 3 start, when he gave up two runs, one of them earned, in five innings.