South Florida returns to action at No. 15 Cincinnati 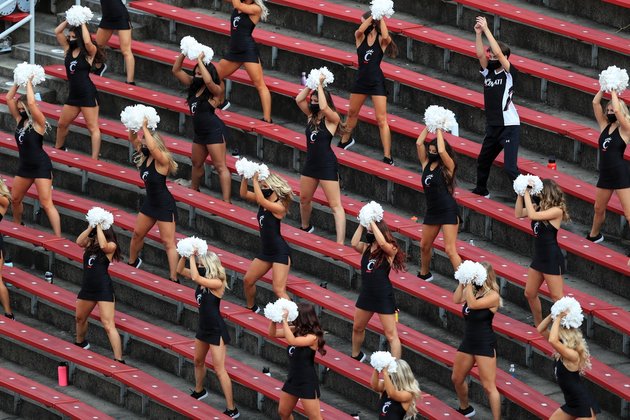 No. 15 Cincinnati looks to continue its perfect start to the 2020 season Saturday when the Bearcats host South Florida in the first American Athletic Conference contest of the season for both teams.

The Bearcats (2-0) are coming off an impressive 24-10 victory over Army at home. While quarterbackDesmond Ritter and the offense were hot-and-cold, the Cincinnati defense was a force to be reckoned with. Led by linebacker Jarrel White -- who was named AAC Defensive Player of the Week after being credited with 15 tackles -- the Bearcats stifled the Black Knights' powerful running attack.

"Defensively, hats off to (Cincinnati defense coordinator Marcus Freeman) and all those guys and the guts that played," coach Luke Fickell said. "They played their butts off. They played hard. They played physically. They played four quarters. Lot of new different things were thrown at them and they did an unbelievable job, not being perfect but finding a way that our guys could play fast."

Despite the impressive victory over a ranked opponent -- the Bearcats held then-No. 22 Army to 182 yards rushing (115 fewer than the Black Knights averaged last season) -- Cincinnati dropped a spot in the AP Poll due to the return of Big Ten and Pac-12 teams to the rankings.

South Florida (1-1) opened the season by beating The Citadel, and then was on the road demolished by No. 7 Notre Dame 52-0 two weeks ago. The Bulls were scheduled to play Florida Atlantic last weekend, but the Wednesday after the Notre Dame game, they were informed that several Fighting Irish players were found to have tested positive for the virus.

South Florida promptly canceled practice and postponed the game with Florida Atlantic. According to ESPN, a South Florida spokesperson said there were "a very low" number of positive results from testing this week, and that there was no indication whether they were a result of the Notre Dame game.

South Florida head coach Jeff Scott said he expects some players to be out due to protocol surrounding testing and contact tracing.

"I'm looking forward to the day where I can say we have zero, but it seems like we are probably going to be in this position all year long as we continue to try and play safely," Scott said.

The Bulls have used multiple quarterbacks this season, and Scott said he has yet to settle on a starter. He said the plan was to play multiple quarterbacks in the first three games in hopes of defining a No. 1 for the start of conference play, but the postponement of the Florida Atlantic game changed that.

Last season, the Bearcats rallied from a 10-point halftime deficit to defeat the Bulls on a last-second field goal from Sam Crosa.

Cincinnati is 6-2 all-time against South Florida when playing in the Queen City.