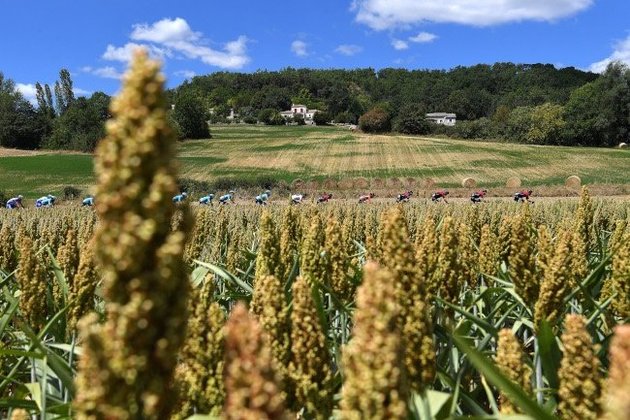 Geraint Thomas' ambitions to win the Giro d'Italia were left in tatters on Monday after a seemingly banal fall eventually took a heavy toll on a hard day of racing.

On the high slopes of Europe's biggest volcano Mount Etna the stage itself was won by little-known Ecuadorian Jonathan Caicedo, survivor of an early break.

"There was suffering and pain, but I made a dream come true," Caicedo said after the race.

Another outsider, Portugal's Joao Almeida, took the overall leader's pink jersey largely due to his strong showing in the individual time-trial on Saturday.

Thomas' accident happened during the pre-race parade when he ran over a discarded water bidon and fell heavily on his left side.

"But as the pace increased and the climbs got steeper he had some pain and had to finish the stage at his own pace."

Of the potential contenders to win the Giro Thomas started the day in the strongest position, but ended it 11 minutes and 17 seconds off the pace and with almost no hope of making that time back.

"It's still a long Giro. We have Filippo (Ganna) and Rohan (Dennis) with some good chances in the time trials," Tosatto said.

But after a poor Tour de France 2020 has become a write off for Ineos, formerly SKY, who dominated cycling for a decade coming into this season.

Another British rider, Simon Yates of Mitchelton-Scott, also had a bad day and stands at 3 minutes 46 seconds adrift of the leader.

"You can only put it down to a bad day."

Portuguese rider Joao Almeida did well on the opening time-trial and did well enough on the high slopes of Etna, surrounded by heaps of black volcanic slag, to take the fabled pink jersey.

"In the end it was just a sufferfest until the finish. I knew I could take the lead in the final 3km and I was feeling good, I would never expect to be in this position and I'm really happy with this," 22-year-old Almeida said.

With Thomas and Yates out of the equation, focus now falls on two-time winner Vincenzo Nibali and Denmark's Jakob Fuglsang.

"I saw Thomas fall but we never expected that. Same for Yates, I'm stunned that this happened on these slopes," said Nibali.

"Victory on a Grand Tour is built day by day, so while today's events went my way, I'll be keeping my feet on the ground for now," said the Italian Trek rider.

Results and standings after stage 3 of the Giro d'Italia, a 150km run to Mount Etna on Monday: