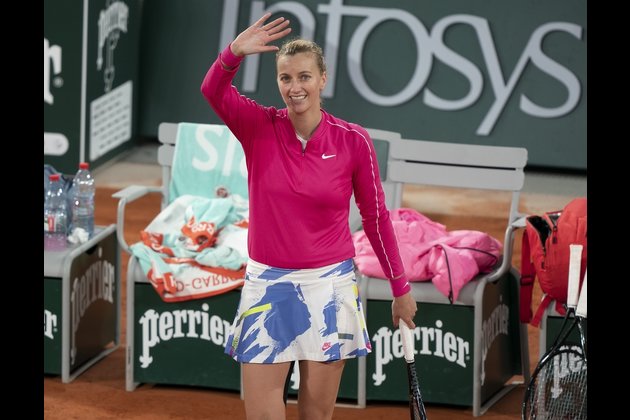 Seventh-seed Petra Kvitova recorded a convincing victory over China's Zhang Shuai on Monday to advance to the French Open quarterfinals for the first time since 2012.

The Czech Republic native was clearly emotional after she posted a 6-2, 6-4 victory in one hour and 25 minutes. Kvitova blew kisses and waved to the small crowd gathered on Court Philippe Chatrier, the tournament's main stadium.

Kvitova admitted that she thought of how far she had come in this tournament, and harkened back to her 2017 comeback from a horrific knife attack.

"I got a bit emotional last two points of my match," Kvitova said. "I really started to think still about the match because in tennis we really never know when it's end. But my memories, happy memories, when I made my comeback here 2017, when I step on the Philippe Chatrier, I couldn't really imagine me to be in the quarterfinal of this slam.

Kvitova used her considerable power with thunderous groundstrokes to record 23 winners to put away Shuai.

The former World No. 2 has two Grand Slam titles to her credit, with both coming at Wimbledon in 2011 and 2014.

"After eight years to be in the quarterfinal again, it's great. I'm really happy for that, that I'm still able to play on all surfaces," Kvitova said. "One year I do remember I won tournaments on all surfaces. I showed myself that I can really play on every surface. So I'm glad for that."

Kvitova will bid for her first semifinal run since 2012 when she faces Germany's Laura Siegemund, who secured a 7-5, 6-2 win over Paula Badosa of Spain.

While Siegemund had little problem with Badosa, she seemed to have greater issue with what she perceived were less-than-impressive snacks. A courtside microphone captured an exchange with an official.

"I have to have a word with my physio," the 22-year-old Siegemund said, before finishing her statement with an expletive.

Kenin, who is the reigning Australian Open champion, will await the winner between 30th-seeded Ons Jabeur of Tunisia and Danielle Collins.