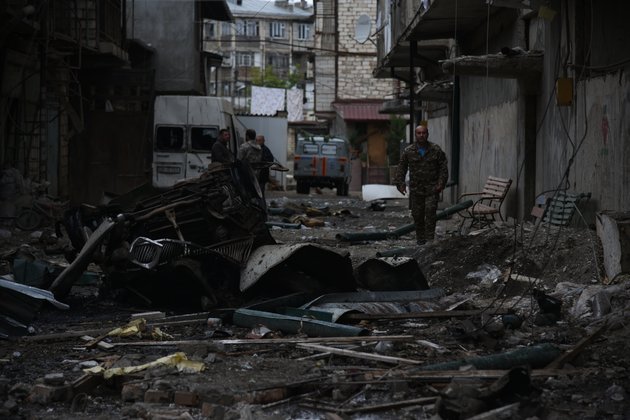 Civilians have been fleeing cities and hunkering in shelters in Nagorno-Karabakh and on the Azerbaijani side of the front lines, as attacks on cities and villages have continued for days on end.

It is difficult to assess the full picture of the effects of the ongoing attacks on populated areas, given the paucity of independent sources of information on the ground. But what accounts have been published suggest that the fighting is making life difficult across a wide swath of territory.

The first few days of this round of fighting, which began on September 27, were concentrated around the front lines separating Azerbaijan proper from the Armenian-controlled territory in and around Nagorno-Karabakh. But Azerbaijani forces began to hit Stepanakert, the de facto capital of Karabakh, heavily on October 2. Armenian forces responded by widening their range of targets, too, heavily hitting cities in Azerbaijan including Ganja, Barda, and Terter.

The attacks on Stepanakert were so punishing that many of the international journalists covering the war - who had been most heavily concentrated in that city - were forced to flee back to Armenia. One of the few journalists who remained, from the Russian government-run Sputnik International, reported on October 5 that it had become a "ghost town" where "nearly all shops have been closed, with streets emptied out and cafes shuttered."

The bombardment only got heavier, however: That day saw the greatest volume of attacks to date, several residents told the news site Caucasian Knot.

"We are spending our whole day in a shelter because of the shooting," one pensioner, Benik Karayan, told Caucasian Knot. "We can't go out anywhere for long or very far because you don't know when the air raid siren is going to sound."

The Azerbaijani attacks on Stepanakert have included Israeli-made cluster bombs, which pose an especially grave danger to civilians, reported Amnesty International, which analyzed footage published by the de facto authorities.

"Cluster bombs are inherently indiscriminate weapons, and their deployment in residential areas is absolutely appalling and unacceptable," said Denis Krivosheev, Amnesty International's acting Head of Eastern Europe and Central Asia, in an October 5 statement. "As fighting continues to escalate, civilians must be protected, not deliberately targeted or recklessly endangered."

It was even more difficult to know what was happening on the Azerbaijani side, given that very few independent journalists have been operating there. The English service of France24 reported on October 6 from the city of Terter, very close to the front lines, where "the streets lie deserted" and Armenian shells land "every few minutes."

Farmers on the Azerbaijani side of the line have been forced out of the fields because of the regular attacks, residents told Caucasian Knot.

"The firing has become more frequent and you don't know when it's going to start again," one farmer, Zabil Mamedov from the village of Aleskerli near Terter, told the website. "In the first days we sent women, children, and the old people to stay with friends and relatives. Now in the village it's mostly only young and middle-aged men."

As of October 4 the de facto Nagorno Karabakh authorities reported 19 civilians killed, including one child. Of those killed, seven were in the capital Stepanakert and six in Martuni, a city closer to the line of contact between the two sides. Following the October 5 bombardment the authorities recorded four more civilian deaths, the territory's human rights ombudsman Artak Beglaryan told Caucasian Knot.

Azerbaijan reported 28 civilians killed as of October 7; it has not provided the same kind of breakdown as the Armenian side.

UNICEF reported on October 6 that four children had been killed in the fighting on both sides. "Without an end to the fighting, these figures will tragically increase," it said in a statement.

The International Committee of the Red Cross also has warned about the danger to civilians from the ongoing fighting. "The ICRC strongly condemns the reported indiscriminate shelling and other alleged unlawful attacks using explosive weaponry in cities, towns and other populated areas, in which civilians are losing their lives and suffering terrible injuries, including life-changing ones," said Martin Schüepp, the organization's Eurasia regional director, in an October 4 statement.

From the available evidence, it does not appear that either side is deliberately aiming at civilian targets. Cities in Karabakh and in Azerbaijani-held areas close to the front lines often contain military facilities.

Officials from both sides, however, have spoken dismissively about the civilians in their way as they attempt to strike military targets.

A senior Azerbaijani presidential adviser, Hikmet Hajiyev, told reporters that the Azerbaijani side was striking only military targets in Stepanakert with precision munitions. "But some unfortunate collateral damage may happen," he said.

In one instance, however, when two French journalists were wounded while covering the fighting in Karabakh, Hajiyev placed the blame on the journalists themselves. "French journalists went to Karabakh controlled by the separatist regime without notifying the Azerbaijani authorities about it," he said. "It is quite clear that Azerbaijan cannot guarantee the safety of any media representatives, who arrive themselves in the war zone."

A spokesman for the de facto Karabakh president, Vagram Poghosyan, said that Armenians had been telling him that they should be striking back against Azerbaijani civilians in response to the attacks on Stepanakert and other cities. "Such a step is excluded, for one simple reason: we are not Turks," he said in a Facebook post. (In Armenian nationalist language, Azerbaijanis are equated with Turks.)

But Poghosyan added that the Armenian side was carrying out missile strikes in targets in major Azerbaijani cities, "though those have not yet been reported on," he said. "I can only add that the result of all of this has been not only a neutralization of many of the reserve forces of the enemy, but heavy traffic on the highway leading to Baku."