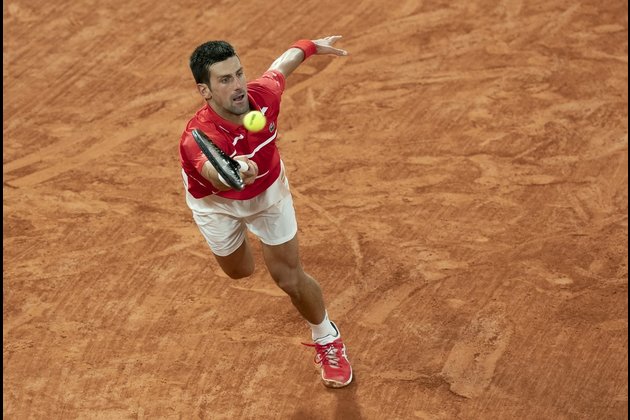 Top-seeded Novak Djokovic fought through health issues on Wednesday and recovered from a challenging first set to knock off Pablo Carreno Busta and reach the semifinals of the French Open at Paris.

Djokovic needed three hours and 10 minutes to finish off a 4-6, 6-2, 6-3, 6-4 victory over the 17th-seeded Carreno Busta to qualify for his 10th career semifinal at Roland Garros.

The 2016 French Open champion recorded 53 winners against 41 unforced errors in the win. He will face fifth-seeded Stefanos Tsitsipas in the semifinals after the Greek defeated 13th-seeded Andrey Rublev 7-5, 6-2, 6-3.

In the other semifinal on Friday, second-seeded Rafael Nadal of Spain will oppose 12th-seeded Diego Schwartzman of Argentina.

Djokovic was visibly hampered in the opening set as his upper left arm and neck repeatedly bothered him. A trainer worked on him after the first set and again after the third game of the second set. Eventually the areas loosened up.

"I definitely didn't feel great coming into the court today. A few things happened in the warmup," Djokovic said. "I had some neck issues and some shoulder issues, I'll just say that. I mean, I don't want to get really too much into it.

"Obviously I'm still in the tournament, so I don't want to reveal too much. I'm feeling OK. As the match progressed, I warmed up my body, and the pain kind of faded away. It allowed me to play better and better and feel better."

Djokovic's play was crisp later in the match as he pulled away from Carreno Busta, but the Spaniard wasn't convinced the Serbian was really ailing.

Carreno Busta's comments about "pressure" were interesting as he was the opponent when Djokovic defaulted his fourth-round match at the U.S. Open after hitting a tennis ball in anger that smacked a line judge in the throat. Carreno Busta led 6-5 in the first round at the time of the incident.

Meanwhile, there wasn't much drama as the 22-year-old Tsitsipas rolled to a win over Rublev to reach his first French Open semifinal.

Tsitsipas notched 35 winners against 17 unforced errors in the victory. He was pushed by the Russian in the first set before sailing through the final two.

"I felt comfortable playing on this court and despite getting off to a bad start and being a break down, I remembered what a big fighter I am," Tsitsipas said. "It's also about finding solutions in difficult moments and I managed to put my brain to work."