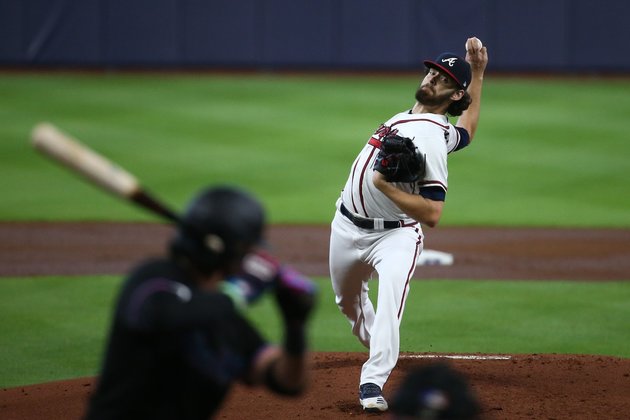 LOS ANGELES -- It's not broken, so the Atlanta Braves aren't likely to fuss with their rotation, even if they have three days to consider it in advance of the National League Championship Series.

The Braves earned their downtime after a three-game sweep of the Miami Marlins in the NL Division Series. They crowned their NLDS triumph with a convincing 7-0 victory in Game 3 at Houston on Thursday.

There might be circumstances that would inspire the Braves to alter the order of their rotation, but left-hander Max Fried in Game 1 and Ian Anderson in Game 2 has worked just fine to this point.

And right-hander Kyle Wright figures to be the Game 3 starter after he dominated the Marlins over six scoreless innings Thursday.

But tinkering with an engine that is humming has its own inherent dangers.

"It's been pretty amazing to see what the pitching staff has done," Braves first baseman Freddie Freeman said. "Back-to-back shutouts, just like in the wild-card series. There has to be some history with this. What they have done is special, and this team is special. We're pretty confident right now."

--The New York Yankees signed Gerrit Cole to a nine-year, $324 million deal in the offseason, giving themselves a legitimate ace to put on the mound if they ever got to a winner-take-all contest. Of course, they really imagined it in Game 7 of a World Series, but there is still time for that.

Instead, Cole will start in the deciding Game 5 of the American League Division Series opposite Tampa Bay Rays right-hander Tyler Glasnow on Friday.

Cole was an impressive 7-3 in 12 regular-season starts with a 2.84 ERA. He also earned a victory in each of his first two playoff starts in a Yankees uniform, including Game 1 of the current series.

Friday's outcome in Game 5 won't make or break the mega-deal, but the Southern California native can further justify it with a strong start in San Diego.

"To be able to hand the ball to the best pitcher in the game, there's comfort in that," Yankees manager Aaron Boone said.

--As Dodgers closer Kenley Jansen struggles with both his velocity and his ability to record outs in save situations, the club is not without other options to finish off tight victories.

Right-hander Blake Treinen saved 38 games for the Oakland Athletics as recently as 2018 when he was an All-Star and finished sixth in AL Cy Young voting. Right-hander Pedro Baez was 2-for-2 in save opportunities this season.

And if the Dodgers want to mix-and-match at closer, left-hander Adam Kolarek had a save in 2020. But he was a mess on Thursday, giving up two runs on three hits and two walks in two-thirds of an inning.

It isn't out of question that Jansen can return to the role, but Dodgers manager Dave Roberts is exploring his options.

"I'm very sensitive to what he has accomplished on the baseball field as a closer and as a perennial All-Star," Roberts said of Jansen. "But we also have to look in real time and do what's best for the Dodgers and he understands that. So, like I said before, when he gets the baseball, I'm going to expect him to get those outs."

--Barring any setbacks in the coming days, as he recovers from his outing Thursday, Houston Astros right-hander Zack Greinke is back in the team's rotation.

Greinke was a scratch from Game 3 of the ALDS against the Oakland Athletics due to arm soreness, but he started Game 4 and went 4 2/3 innings as Houston advanced with an 11-6 victory.

The 36-year-old veteran was not sharp by any stretch, but the Astros will be more than pleased if he is available moving deeper into the playoffs.

"If it feels like it did today, there will be no issues," Greinke said. "Everything was fine when it comes to the arm."

--With a third-inning RBI single Thursday, the Dodgers' Justin Turner passed Steve Garvey for most postseason hits in franchise history with 64. ... The Yankees' Gleyber Torres hit his fifth career postseason home run, tying Mickey Mantle for the most in franchise history from a player age 23 or younger. ... The Braves handed the Marlins their first-ever loss in a playoff series after the club won the World Series in its two other postseason appearances (1997, 2003).