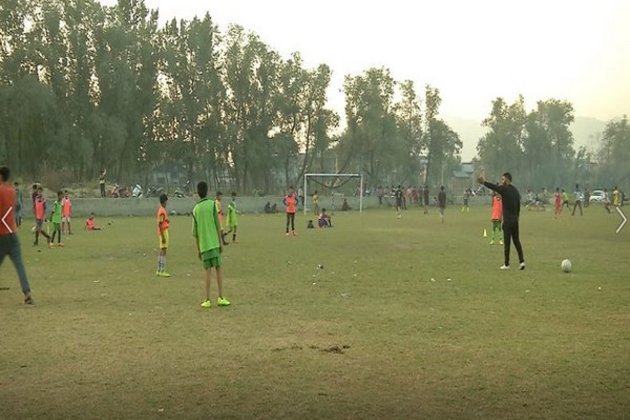 Srinagar (Jammu and Kashmir) [India], October 11 (ANI): After a lull of almost two years, the Jammu and Kashmir authorities have organised a grassroots football camp in Srinagar in which players are taking part under the guidance of renowned coaches and trainers.

All sports activities--including football--were hit by the COVID-19 pandemic. But now things are getting back to normal and the government has started sports activities such as the grassroots-level football camp. Energetic youths enjoy the camp and urged the authorities to continue the activities in future also.

"Overseas, there is a lot of focus on grassroots. In India the focus on grassroots has been less in football. However, if we could focus more on the grassroots level programme, we too can also compete in European leagues," said Mohamad Abdullah, a football coach told ANI.

He said that with football resuming at the grassroots level almost after two years, the fitness levels of the players have been lagging behind.

"It is not their fault that they have been sitting at home. Football is resuming after a gap of two years," he added.

Now gaining full fitness is a possibility as the government has now given permission for the resumption of sports activities. Junaid Manzoor, a football player, emphasised the importance of grassroot football saying, "The grassroots camp is important as the children come and play here and then move on to further levels."Mohamad Musaib, a trainee, said that with the resumption of the camp post-COVID-19, children are less glued to their phones and other gizmos. "We don't pay much attention to our phones now. We couldn't play previously because of school and COVID-19. It is important that grassroots camps are organised as fitness would improve," he said.

"These camps must continue as we and the generations to come can learn from this," Musaib added. (ANI)