Astros search for clutch hits in Game 3 vs. Rays 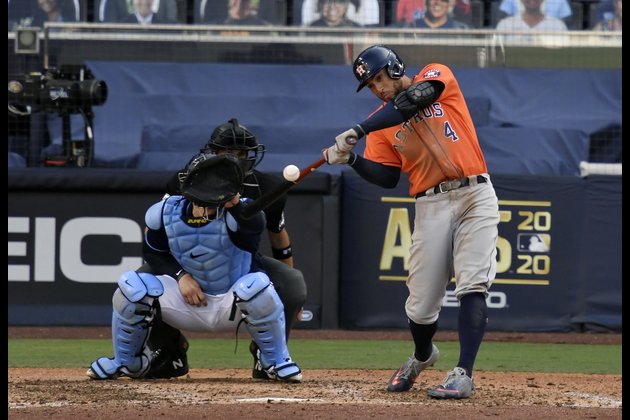 The Houston Astros are in need of a swift turnaround entering Game 3 of the American League Championship Series, but manager Dusty Baker insists there won't be a major speech or inspiring pep talk prior to Tuesday's crucial game against the Tampa Bay Rays.

The Astros scored just three runs and left 21 runners on base while losing the first two games at Petco Park in San Diego, and Baker doesn't think a spirit-boosting sermon will be of any help.

"I'm not going to have a message other than, 'Hey boys, we got to keep swinging it,'" Baker said Monday after Houston's 4-2 setback in Game 2. "That's all you can do. Talk is cheap. We just got to find some holes."

Being stymied by the Tampa Bay defense has been a recurring theme over the first two games. Rays third baseman Joey Wendle has been superb, and right fielder Manuel Margot made a catch for the ages in Game 2.

The misfortune leaves the Astros in must-win mode entering Game 3, and Baker feels the team is due a change in luck.

"It's very frustrating ... it hurts," Baker said. "You just know if we keep hitting the ball like that, we're going to get some breaks at some point."

Two pitches later, the score was 3-0 as Margot slugged a homer to center that provided the Rays with all the runs they would need.

"We capitalized on a miscue," Rays manager Kevin Cash said. "Good teams have the ability to do that."

Tampa Bay had just four hits in Game 2, and two were homers. Mike Zunino also powered one over the center field fence.

Five of the Rays' six runs in the series have come on homers. Randy Arozarena hit a solo blast during Tampa Bay's 2-1 win in the opener, and Zunino added an RBI single in that contest.

Tampa Bay has just 10 hits in the series, but the offensive woes aren't deep under the microscope since the team won both games.

Even so, Cash is very aware his club needs more production so it can score two more wins and reach the World Series for just the second time in the franchise's 23-season history.

"We got some guys with the bat who are seeing the ball and coming up with big hits," Cash said. "But we have some other guys who can get hot here, and if we do, we just become that much more dangerous as a club."

Right-hander Jose Urquidy will get the ball for the Astros in Game 3, making his third start of the postseason. He pitched 4 1/3 innings in each of the outings and received no-decisions each time.

The 25-year-old gave up one run and two hits against the Minnesota Twins in Game 2 of the first-round series, then served up four solo homers while allowing four runs and five hits against the Oakland Athletics in Game 3 of the AL Division Series.

"The last one was hard for me, but it's part of baseball and I think I got another chance to pitch (Tuesday) and another chance to demonstrate my position as being a starter," said Urquidy, who went 1-1 with a 2.73 ERA in five regular-season starts this year. "I think we are going to do a better job than the last outing."

Yarbrough, 28, pitched five innings of relief against the New York Yankees in Game 4 of the ALDS, giving up two runs and six hits. He struck out one and walked one.

Yarbrough also made three relief appearances in the 2019 postseason, going 1-0 while allowing no runs and two runs in three innings. His career postseason ERA is 2.25. He went 1-4 with a 3.56 ERA in 11 games (nine starts) in the 2020 regular-season, pitching five or more innings seven times.

Urquidy will be opposing the Rays for the first time in his two-year major league career. Yarbrough has an 0-1 record with a 2.92 ERA against the Astros in two career meetings (one start).