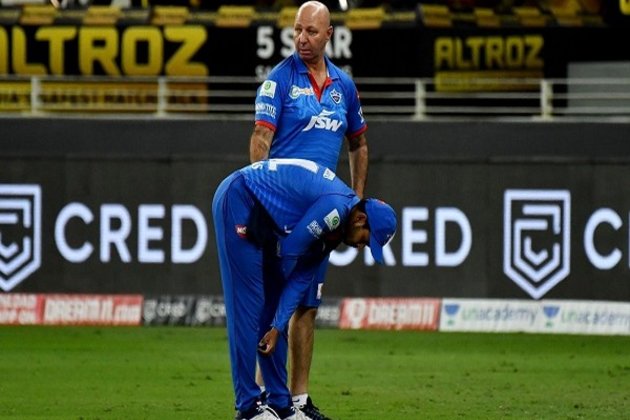 Dubai [UAE], October 15 (ANI): Delhi Capitals might have won the game against Rajasthan Royals here at the Dubai International Cricket Stadium on Wednesday, but the team suffered a blow as skipper Shreyas Iyer suffered an injury and walked off the field.

In the fifth over Iyer ended up hurting his shoulder while trying to stop the ball and had to leave the field due to severe pain.

Speaking after the game, stand-in captain Shikhar Dhawan said that Iyer is in pain and they will get to know about the complete picture after the reports come tomorrow.

"Shreyas is in a bit of pain. We will know more tomorrow. His shoulder is moving, touch wood. I am glad that we won this game," said Dhawan during the post-match presentation via host broadcaster Star Sports.

With Shreyas Iyer getting injured, Delhi Capitals have suffered a major blow as Rishabh Pant is already out for a while with a Grade 1 tear. The wicket-keeper batsman on Friday limped his way to complete the catch off Varun Aaron's bat as DC celebrated an emphatic win over Rajasthan Royals at the Sharjah Cricket Stadium.

Delhi Capitals defeated Rajasthan Royals Dhawan by 13 runs on the back of some fine bowling performances. Before that Dhawan and Iyer had powered their side to a respectable total of 161 runs.

"Coming back into this was a great team effort. Quite enjoyed it. We always believed we had a chance. We knew their batting is not that deep," said Dhawan.

"We knew we could get into them if we got the top order. And we have got experience in the bowling. Now we have got a gun bowler in Anrich," he added. (ANI)