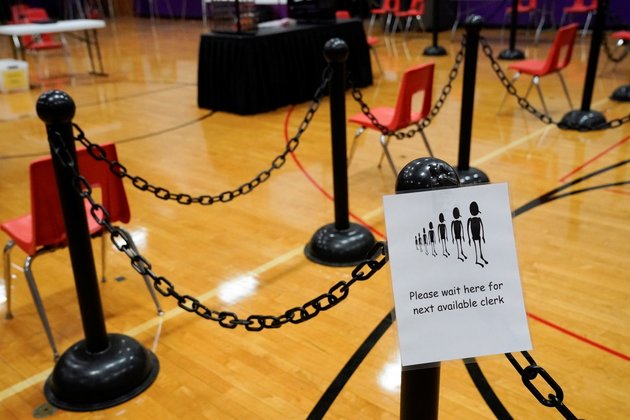 As tensions mounted on the eve of a bitterly contested presidential election Tuesday, law enforcement officials assured voters they can cast their ballots without fear of intimidation and violence.

With just hours left before polls opened across the country for a final round of voting in the 2020 presidential and congressional election, voting rights advocates and top law enforcement officials in key battleground states on Monday sought to assuage voter angst.

"I'm very confident we're going to have a safe and secure voting process in Wisconsin and that things are going to go smoothly at the polls tomorrow," Wisconsin Attorney General Josh Kaul said during a press call.

"We will do whatever is necessary to keep our polling area safe so that every North Carolinian feels confident in knowing that they can vote without any form of harassment," North Carolina Attorney General Josh Stein added, also during the press call.

North Carolina and Wisconsin are among a dozen or so battleground states where Trump and Biden are either running neck and neck or Biden holds a slight advantage. The outcome of those dozen races is seen as crucial to determining the winner of the presidential election.

Pre-election anxiety is not new. Political tensions tend to spike around national elections, said Brian Levin, director of the center for the study of hate and extremism at California State University.

In the run-up to the election, extremism watchdogs have been warning about increased activity by far-right groups, while law enforcement agencies have been preparing for the possibility, however remote, of electoral violence. While it is too early to say what Tuesday will usher in, businesses have begun boarding up their storefronts in New York, Washington and elsewhere in anticipation of potential unrest.

The anxiety has been fueled in part by a series of incidents over the weekend involving Trump supporters and Democratic voters.

On Friday, a caravan of Trump supporters followed a Biden campaign bus as it drove down a highway near the central Texas town of San Marcos. The bus, part of a Biden campaign tour of the state, was escorted out of the confrontation by police. The Biden campaign said it canceled three events over "safety concerns."

The FBI and the San Marcos Police Department are investigating the incident. In a statement, the Texas Department of Public Safety said it will "provide assistance as necessary."

While voting rights advocates welcomed the investigation, Trump appeared to endorse the skirmish, raising worries that his followers could take matters into their own hands on Election Day or beyond.

On Saturday, the president tweeted a video of the incident with the words "I LOVE TEXAS." On Sunday, tweeting that "these patriots did nothing wrong," Trump criticized the FBI for opening an investigation.

In recent days, Trump supporters have staged caravan rallies around the country, from Arizona to Washington state. On Sunday, a convoy of the president's supporters halted traffic in the New York City area, while clashes between police and anti-Trump protesters in Manhattan led to 11 arrests.

Kaul, the Wisconsin attorney general, said that while voters have the right to turn out in support of their candidate, "where the line gets crossed is when you go from exercising your own rights to threatening somebody else's safety and interfering with somebody else's own First Amendment rights," he said.

"What happened in Texas is absolutely unacceptable," Kaul said.

Some recent confrontations have involved violence.

On Saturday, a violent scuffle broke out between pro- and anti-Trump supporters in Beverly Hills, California. Local police declared an unlawful assembly as it dispersed the crowd. One Trump supporter was reportedly injured.

Across the country in the town of Graham, North Carolina, police pepper-sprayed a group of civil rights protesters as they marched to the polls on Saturday. The Alamance County Sheriff's Office said the "rally ended due to concerns for the safety of all."

Finally, in Topeka, Kansas, a man allegedly shot three teenagers he suspected of stealing Trump signs from his front yard. One person was critically wounded. Police are investigating the incident.

Sarah Brannon, managing attorney with ACLU's Voting Rights Project, said the incidents reflect the mood of a nation on edge.