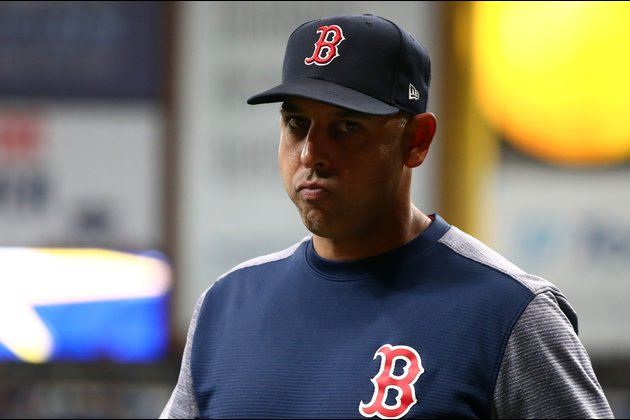 The Boston Red Sox brought back manager Alex Cora for a second stint with the team on Friday.

Cora previously met with the team's chief baseball officer, Chaim Bloom, and general manager Brian O'Halloran, about returningto the job he held in the 2018 and 2019 seasons.

Cora, 45, and the Red Sox parted ways last January amid Major League Baseball's investigation into illegal sign-stealing. Cora was identified by MLB as a ringleader in the Astros' scheme to steal signs en route to their 2017 World Series championship, when he was Houston's bench coach.

He subsequently was suspended by MLB in April through the end of the 2020 postseason "for his conduct as bench coach for the Houston Astros in 2017," commissioner Rob Manfred said at the time.

"I am grateful for the opportunity to manage once again and return to the game I have loved my entire life," Cora said in a statement. "This past year, I have had time to reflect and evaluate many things, and I recognize how fortunate I am to lead this team once again ...

"I am eager to get back to work with our front office, coaches, and especially our players. Boston is where I have always wanted to be and I could not be more excited to help the Red Sox achieve our ultimate goal of winning in October."

Cora became Boston's manager in 2018 and led his new team to the World Series title -- albeit with suspicions regarding similar illegal sign-stealing. A video replay operator was banned and the Red Sox were stripped of a second-round pick in the 2020 draft, but the punishment was light compared to the Astros' sanctions.

The following season, the Red Sox finished 84-78 and did not make the playoffs.

Boston finished last in the American League East this past season under manager Ron Roenicke, going 24-36 in the pandemic-shortened season. Roenicke was fired after the season, his third with the organization. He was Cora's bench coach in 2018 and 2019.

"We considered a very impressive slate of candidates -- the brightest managerial prospects in the game today," Bloom said. "Because of all that had happened, I knew that I wanted to speak with Alex once his suspension ended, but I didn't yet know if it made sense to consider him for the job as well. Our conversations were lengthy, intense, and emotional. Alex knows that what he did was wrong, and he regrets it.

"My belief is that every candidate should be considered in full: strengths and weaknesses, accomplishments and failures. That is what I did with Alex in making this choice. He loves the Red Sox and the game of baseball, and because of that we believe he will make good on this second chance."