Cora apologetic as he returns to manage Red Sox 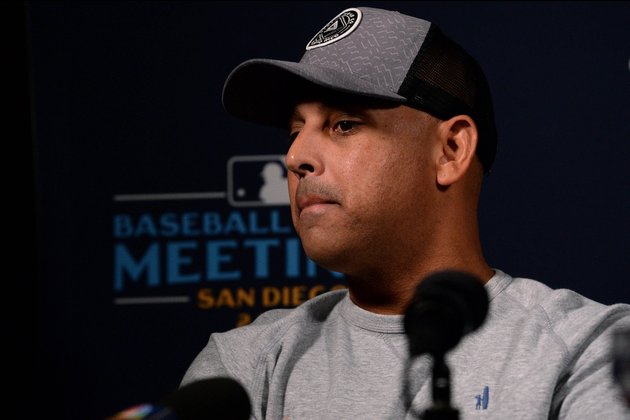 Alex Cora was contrite at a press conference Tuesday as he was re-introduced as Boston Red Sox manager less than a year after being fired for his involvement in a cheating scandal at his former job, as a coach with the Houston Astros.

Cora was identified through a 2019 Major League Baseball investigation as the only non-player involved in the Astros' 2017 cheating ploy, which included stealing signs meant for the opposing pitcher through live video and then relaying them to Astros hitters via bangs on a trash can behind the dugout.

The Astros ended up winning the World Series in 2017, an honor that helped raise Cora's profile as a managerial candidate. He was hired as manager by the Red Sox in 2018 and the team went on to win a World Series of their own that year.

"I was spending time at home (in 2020) for the wrong reasons, and for that I want to apologize," said Cora, who was given a one-season suspension by MLB earlier this year, but the Red Sox elected to fire him in January. "I deserve what has happened this year.

"It's not something I'm proud of, but we went through the whole process with the commissioner's office and, in the end, I got my penalty and I served it."

The Red Sox made bench coach Ron Roenicke their manager for 2020, but he was fired in advance of the team's season finale in September, as the club went 24-36 in the pandemic-shortened 60-game season.

The Red Sox have now turned back to Cora to revive their winning ways, officially hiring him again on Nov. 6.

"I want to apologize to the organization for putting them in such a tough spot coming into the season," Cora said. "I never thought I was going to be in the situation that I was in. ... Like I told (Red Sox chief baseball officer) Chaim (Bloom) when we decided to part ways, 'Sorry for what happened, and sorry for what happened during the year.' As a leader, as a person who loves to manage, I put the organization in a tough spot and I'm sorry."

Cora's Red Sox won 108 regular-season games during the championship season of 2018, but that slipped to 84 victories in 2019. Now he returns to the bench of a team in dire need of pitching additions this offseason, both in the rotation and bullpen.

Moving forward, he hopes to be judged on his leadership skills as manager and not the poor decisions he made as an Astros coach. Cora insisted he never brought the sign-stealing scheme to Boston.

"I know they were disappointed for everything that happened," Cora said. " ... They've been very supportive. They understand that we all make mistakes."