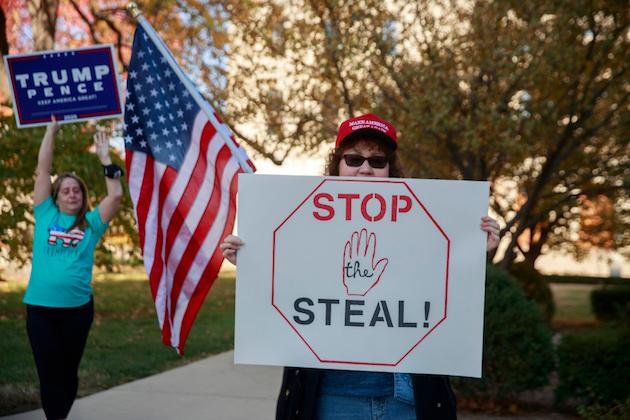 WASHINGTON, DC - President Donald Trump is misleading his tens of millions of supporters by seeking to raise funds from them for purposes other than those he has designated.

The Trump camp is asking supporters to put up money to pay for the extensive litigation being mounted across the country to challenge the presidential election result.

While supporters may believe they are financing legal challenges, unless their donation is over $8,000 it is actually being directed elsewhere, principally to a political action committee or PAC, which Mr Trump established on Monday of this week. The new entity, labelled "Save America" has been set up to allow Mr Trump to exercise his influence over the Republican Party, and thus the country.

So grass roots supporters, the moms and dads will be parting with their hard-earned money to help build Mr Trump's influence and lobbying power.

Texts are being sent to supporters repeating baseless claims being made publicly that the 3 November 2020 election was fraudulent. "The Left will try to STEAL this election!" one text said.

Donors are directed to an "Official Election Defense Fund" website where they are asked to sign on for monthly donations for the purpose of a fighting fund to challenge the outcome of the 2020 election.

There is increasing speculation Mr Trump will join the 2024 race in a bid to be re-elected and some of the funds will be used for his 2024 campaign.

It is only in the fine print that details of where the money is going is outlined.

If readers examine the fine print however they will see that 60 percent of what they contribute will go to the "Save America" PAC ,while the other 40 percent will go to the RNC. None of the money will go to the legal defense of the president's 2020 campaign - unless the donation is above $8,000.

"It's important to be up front with people, especially those who are digging deep into their pockets to come up with $25," Michael DuHaime, a former political director at the RNC was quoted as saying by the Reuters Thomson news agency. "If you tell them it's going for legal fees, well then it should go for legal fees."

Darrell Scott, an Ohio pastor who helped establish the National Diversity Coalition for Trump and served on the president's 2016 transition team, told Reuters he saw no issue with what is being done.

"I see this as two pockets on the same pair of pants. It doesn't matter if it goes into the left or the right pocket," Scott said. "In the end, the money will be used for a legitimate purpose that his supporters will get behind."