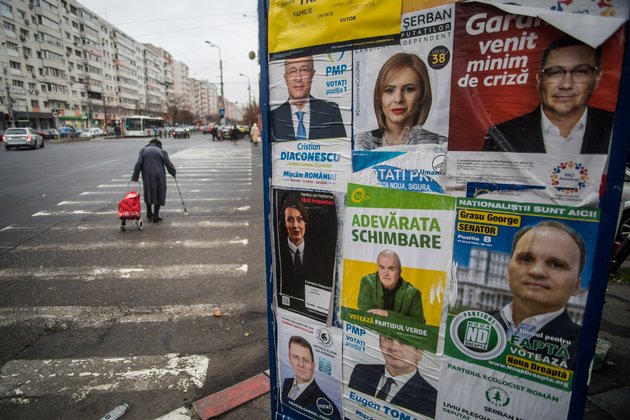 BUCHAREST, ROMANIA - Romanians head to the polls Sunday in a national ballot key to restoring the country's reputation among investors, with the incumbent, reform-oriented centrists of Prime Minister Ludovic Orban holding a narrow lead over opposition Social Democrats.

In power for a year despite his opponents' hold over parliament, Orban, 57, has said he would undo a 40% pension hike ordered by the leftist PSD, which economists say could bloat the deficit to 11% of GDP and push Romania's credit rating to junk.

He has pledged to halt efforts by leftist-led cabinets to sap court independence amid the judiciary's scrutiny of alleged corruption and misuse of funds, accusations the PSD denies.

Orban has campaigned on a promise to bring the Black Sea state closer to the European mainstream following years of fiscal populism and political instability coupled with neglect of rundown infrastructure and public services.

"There is a decisive choice to make on December 6: We can become a top EU member or remain, again, a laggard," Orban told party members during the campaign. "I'm not happy with an average Romania."

The Romanian leu has traded near all-time lows against the euro in the last year, following a string of corruption-related scandals that has toppled three governments since the last parliamentary election in 2016.

All three main rating agencies have Romania only one notch above junk and on a negative outlook.

Seeking reelection one year after the government it led stepped down in a no-confidence vote, the PSD has clawed back support in recent months, amid anxiety among its core rural electorate over Orban's fiscal conservatism.

The coronavirus pandemic has also fueled anger over social distancing restrictions that have hit thousands of small farmers who sell their produce in nearby cities.

More than 18 million Romanians are eligible to vote, but analysts expect turnout of about 40% because of voters' fear of contagion, with polls to open at 7 a.m. (0500 GMT) and close at 9 p.m.

If it wins on Sunday, the PNL is expected to seek a governing coalition with the progressive USR-Plus party, running at 15% to 17%.

With a year-on-year contraction of 6% in the third quarter, Romania's economic performance has been among the worst in the European Union during the pandemic, although the PNL says it has sought to keep much of the economy open.

"As all countries have found, it is immensely difficult to strike a balance between keeping people safe and protecting livelihoods," Siegfried Mureșan, a PNL member of the European Parliament, said.

The PSD blamed the government, however, for going too far, by shutting indoor farmers markets during wintertime.

"You need to vote to rescue yourself," PSD leader Marcel Ciolacu said on his Facebook page. "Romanians want a government to stop this virus and bring back hope, reopen schools, create safe jobs and decent pensions."