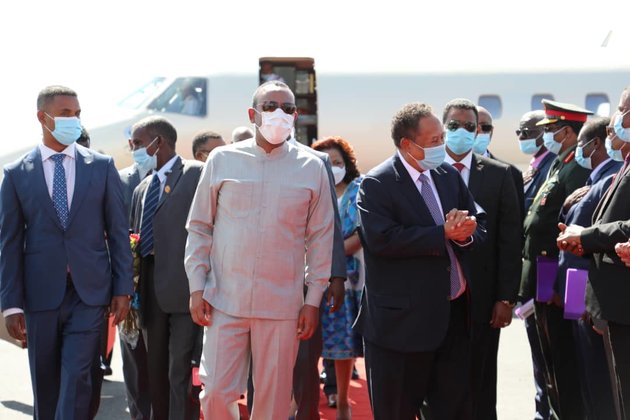 "I look forward to having productive discussions on political, humanitarian and security matters of common concern that serve the future of peace, stability and prosperity for our two sisterly nations and the region," Hamdok wrote on Twitter early in his visit.

Hamdok's visit was initially scheduled to last for two days, but he returned to Sudan after a few hours. It was not clear why the trip was cut short.

Ethiopian Prime Minister Abiy Ahmed says the violence in Tigray has stopped and that there is no need for Sudan's offer to broker a cease-fire.

Tigray, the northernmost of Ethiopia's nine regional states, defiantly held elections in September from which Debretsion Gebremichael emerged the leader, despite Prime Minister Abiy's decision to postpone the polls, citing the coronavirus pandemic.

Ethiopia's government took military action against Tigray after the region's forces attacked a military camp of federal troops November 4, according to Prime Minister Abiy. The Abiy government considers the regional government, led by the Tigray People's Liberation Front, or TPLF, as illegitimate. The TPLF denied staging the attack.

The United Nations and a number of Western countries have condemned the violence in Ethiopia. Telecommunications have been cut in the Tigray region, making it difficult for journalists and aid workers to confirm death tolls or accounts of violence.

But refugees in Sudan have recounted tales of offenses against their towns and villages. More than 50,000 people have fled violence in Tigray and headed for Sudan since November.