No. 21 Duke travels to Notre Dame in ACC opener for both 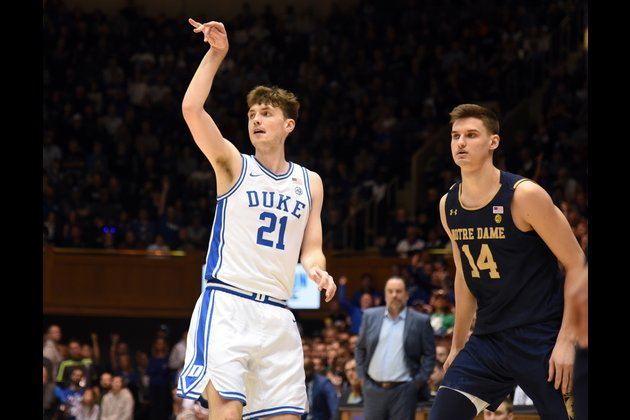 No. 21 Duke travels to Notre Dame for Wednesday night's Atlantic Coast Conference opener with both teams talking about experience and game maturity.

Those discussion points come for different reasons for a pair of teams with 2-2 records heading into the game at South Bend, Ind.

Duke is tryingto gain traction after a couple of losses in home games. Notre Dame might have discovered a foundation with Saturday's first-ever victory at Kentucky.

"We talked about growing up and getting one of these," Notre Dame coach Mike Brey said. "I think it's something we can build on."

Duke doesn't have a notable victory so far, falling to nationally ranked Michigan State and Illinois. It might take time for the Blue Devils.

"This group is one of the youngest we have had," Duke coach Mike Krzyzewski said. "It creates a new dynamic that is difficult."

So finishing the task at Kentucky might set the stage for better things ahead.

But getting a key result before embarking on ACC play was highly coveted by the Irish.

"I think it's a big confidence booster for us," said junior Nate Laszewski, who posted a season-high 21 points at Kentucky. "We talked a lot about it's the next step we have to take."

Notre Dame built a 22-point halftime lead on Kentucky before hanging on for a 64-63 result, needing a defensive stop at the end.

"I loved that we had to play defense to win a game," Brey said. "It's still early in the season. ... We can still defend and rebound enough to win a game."

While the last defensive effort came via man-to-man defense, the Irish have used a lot of 1-3-1 zone at that end of the court this season.

Regardless of how Notre Dame decides to defend Duke, it might create another chore for the Blue Devils.

"The four games we've played, obviously we're not playing very well on the offensive end," Krzyzewski said. "There are some good segments, but not the consistency. ... We just have to keep working at it. We're not a good team right now because of our offense. We're OK."

The Blue Devils will aim to establish better offensive flow.

"We're going to continue to work on our offense, whether it's motion offense or set plays," forward Matthew Hurt said. "But I think (we have to) just keep attacking the rim, just find the open guy."

This will be Duke's first road game. So that might add to the challenges as another young batch of Blue Devils adjusts to the transition.

Duke, which has won its past six meetings with Notre Dame, announced last week that it would play only ACC games for the remainder of the regular season. It had three nonleague games called off because of coronavirus-related issues with scheduled opponents. One of those games had been rescheduled, but the Gardner-Webb game reset for Dec. 19 was then wiped off the schedule by Duke's decision.

"We're going to play conference and hopefully play all of them," Krzyzewski said.

Duke won't play again until after Christmas. Meanwhile, Notre Dame has games against Purdue (in Indianapolis) and at Syracuse before the holiday.